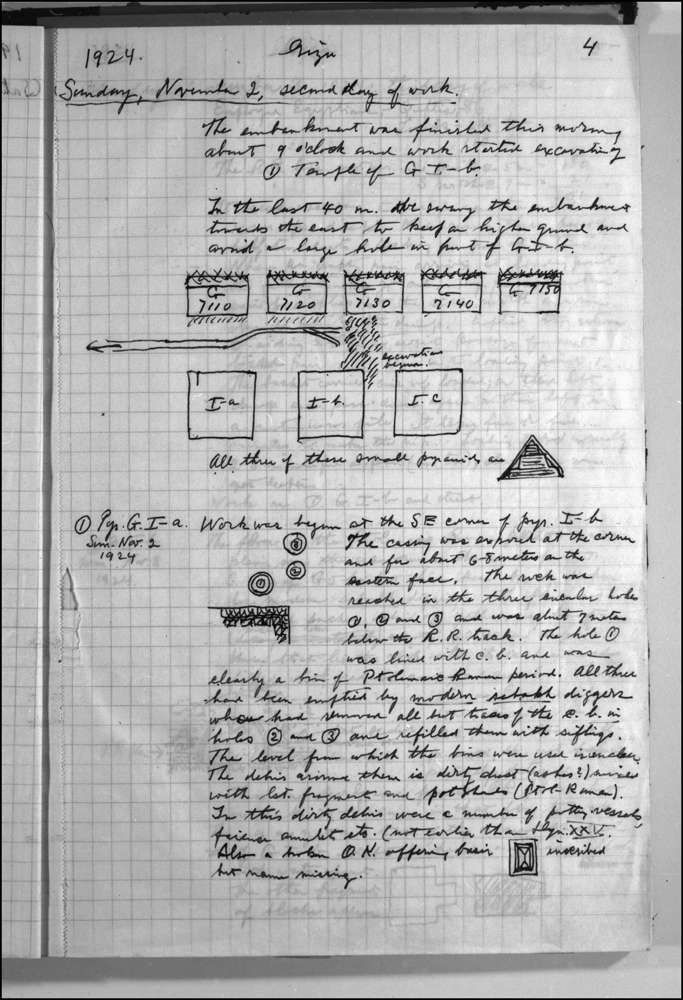 The embankment was finished this morning about 9 o'clock and work started excavation of (1) temple of G I-b.
In the last 40 meters we swung the embankment towards the east to keep a higher ground and avoid a large hole in front of G I-b.

All three of these small pyramids are [ILLUSTRATION].

(1) Pyramid G I-a. Work was begun at the southeast corner of pyramid G I-b. The casing was exposed at the corner and for about 6 - 8 meters on the eastern face. [ILLUSTRATION] The rock was reached in the three circular holes (1), (2) and (3) and was about 7 meters below the railroad track. The hole (1) was lined with crude brick and was clearly a bin of Ptolemaic-Roman period. All three had been emptied by modern sebbakh diggers who had removed all but traces of the crude brick in holes (2) and (3) and refilled them with siftings. The level from which the bins were used is unclear. The debris around them is dirty dust (ashes?) mixed with limestone fragments and potsherds (Ptolemaic-Roman). In this dirty debris were a number of pottery vessels, faience amulets, etc. (not earlier than Dynasty 25). Also a broken Old Kingdom offering basin [24-11-19] [ILLUSTRATION] inscribed but name missing.