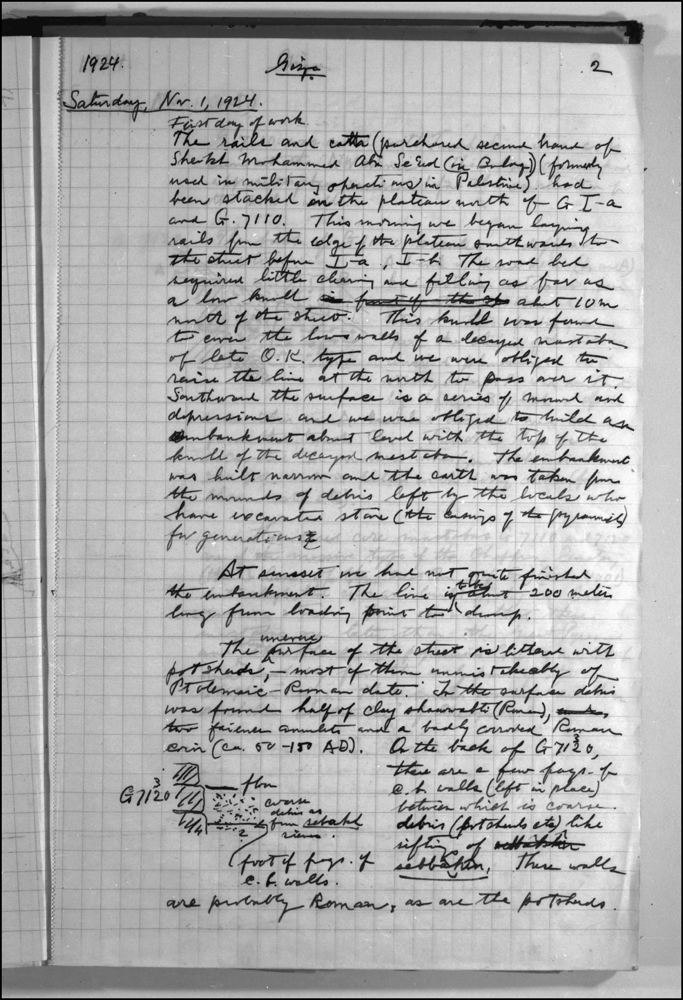 The rails and carts (purchased second hand of Sheikh Mohammed Abu Se'ud (in Bulaq) formerly used in military operations in Palestine) had been stacked on the plateau north of G I-a and G 7110. This morning we began laying rails from the edge of the plateau southwards to the street before G I-a, G I-b [street G 7000]. The road bed required little clearing and filled as far as a low knoll about 10 meters north of the street. This knoll was formed to even the low walls of a decayed mastaba of late Old Kingdom type and we were obliged to raise the line at the north to pass over it. Southward the surface is a series of mound and depressions and we were obliged to build an embankment about level with the top of the knoll of the decayed mastaba. The embankment was built narrow and the earth was taken from the mounds of debris left by the locals who have excavated stone (the casings of the pyramids) for generations.
At sunset we had not quite finished the embankment. The line is to be about 200 meters long from loading point to dump.
The uneven surface of the street is littered with potsherds, most of them unmistakably of Ptolemaic-Roman date. In the surface debris was found half of clay ushabti (Roman), two faience amulets and a badly corroded Roman coin (about 50 - 150 A.D.).

On the back of G 7120 [G 7130?] there are a few fragments of crude brick walls (left in place) between which is coarse debris (potsherds etc.) like siftings of sebbakheem. These walls probably Roman, as are the potsherds.