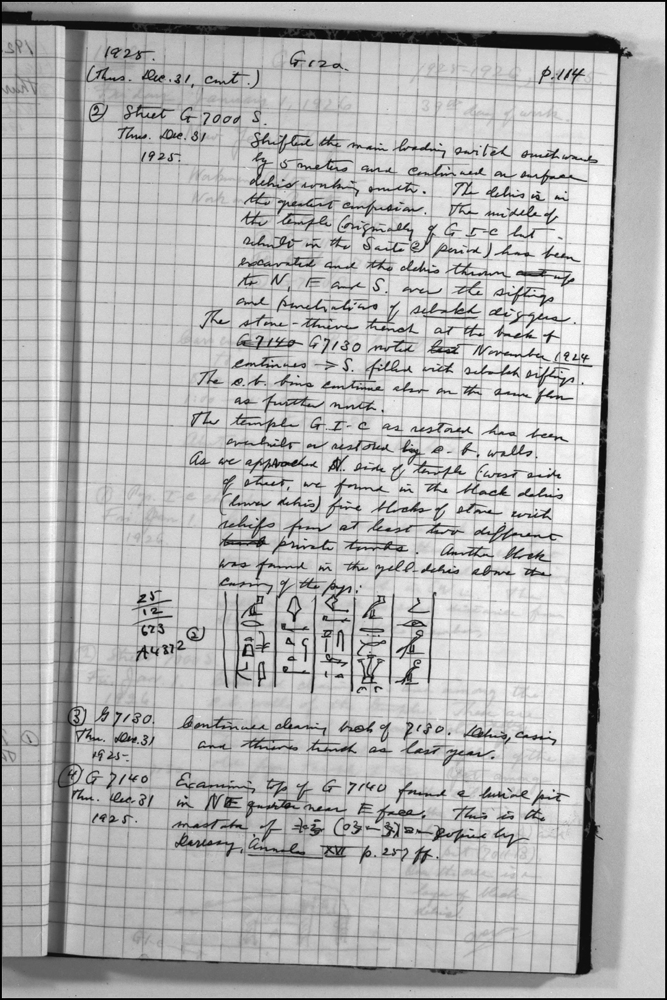 (2) Street G 7000 S (south)
Shifted the main loading switch southwards by five meters and continued on surface debris working south. The debris is in the greatest confusion. The middle of the temple (originally of G I-c but rebuilt in the Saite (?) period) has been excavated and the debris thrown up to north, east and south over the siftings and punctuations of sebbakh diggers.
The stone-thieves trench at the back of G 7130 noted November 1924 continues toward south filled with sebbakh siftings [fragment of stela 25-12-663 inscribed for Washptah found in sebbakh siftings].
The crude brick bins continue also on the same floor as further north.
The temple G I-c as restored has been overbuilt or restored by crude brick walls.
As we approached north side of temple (west side of street, we found in the black debris (lower debris) fine blocks of stone with reliefs from at least two different private tombs. Another block was found in the yellow debris above the casing of the pyramid [including fragments 25-12-673 a, b, c; Tjemit appears on fragment 25-12-673c]:

(4) G 7140
Examining top of G 7140 found a burial pit in northeast corner near east face. This is the mastaba of [GLYPHS] [Khufukhaf] copied by Daressy Annals page 257 ff.