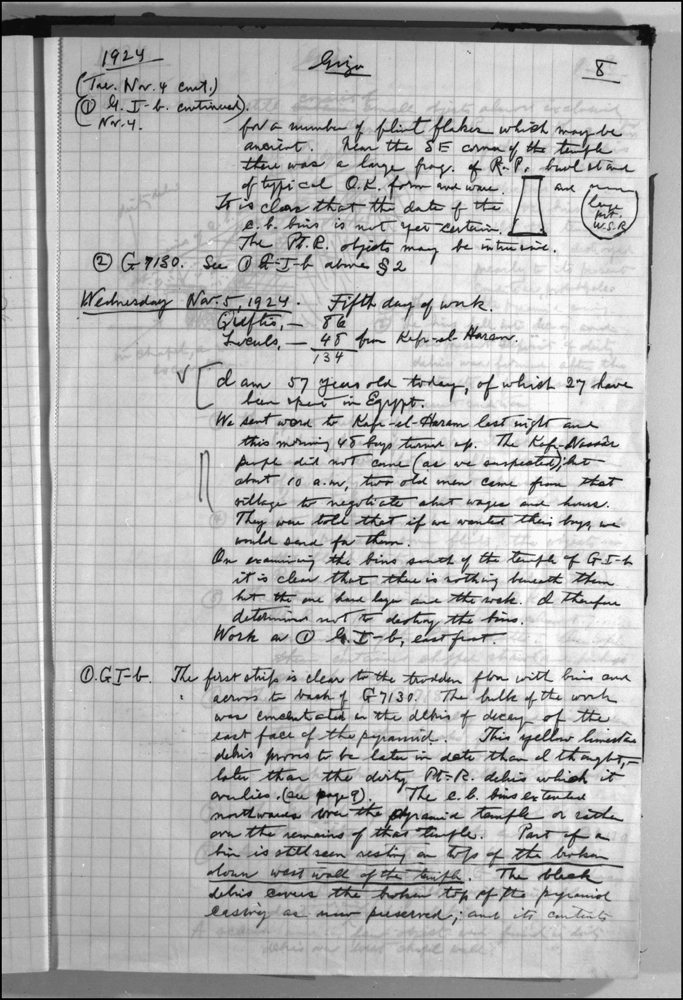 (1) G I-b and street [G 7000] (continued)
for a number of flint flakes which may be ancient. Near the southeast corner of the temple there was a large fragment of R.P. [red polished?] bowl stand [24-11-137] of typical Old Kingdom form and ware [ILLUSTRATION] and large W.S.R [ILLUSTRATION]. It is clear that the date of the crude brick bins is not yet certain. The Ptolemaic-Roman objects may be intrusive.

I am fifty-seven years old today, of which twenty-seven have been spent in Egypt.

We sent word to Kafr-el-Haram last night and this morning forty-eight boys turned up. The Kafr-Nassur people did not come (as we suspected), but about 10 a.m., two old men came from that village to negotiate about wages and hours. They were told that if we wanted their boys, we would send for them. [The dissatisfaction had evidently been stirred up by the old men who wanted to take a rake-off on the wages.]

On examining the bins south of the temple of G I-b it is clear that there is nothing beneath them but the one hard layer and the rock. I therefore determined not to destroy the bins.

(1) G I-b [and Street G 7000]
The first strip is clear to the trodden floor with bins and across to back of G 7130. The bulk of the work was concentrated on the debris of decay of the east face of the pyramid. This yellow limestone debris proves to be later in date than I thought, - later than the dirty Ptolemaic-Roman debris which it overlies (see page 9). The crude brick bins extended northwards over the pyramid temple or rather over the remains of that temple. Part of a bin is still seen resting on top of the broken down west wall of the temple. The black debris covers the broken top of the pyramid casing as now preserved, and its contents