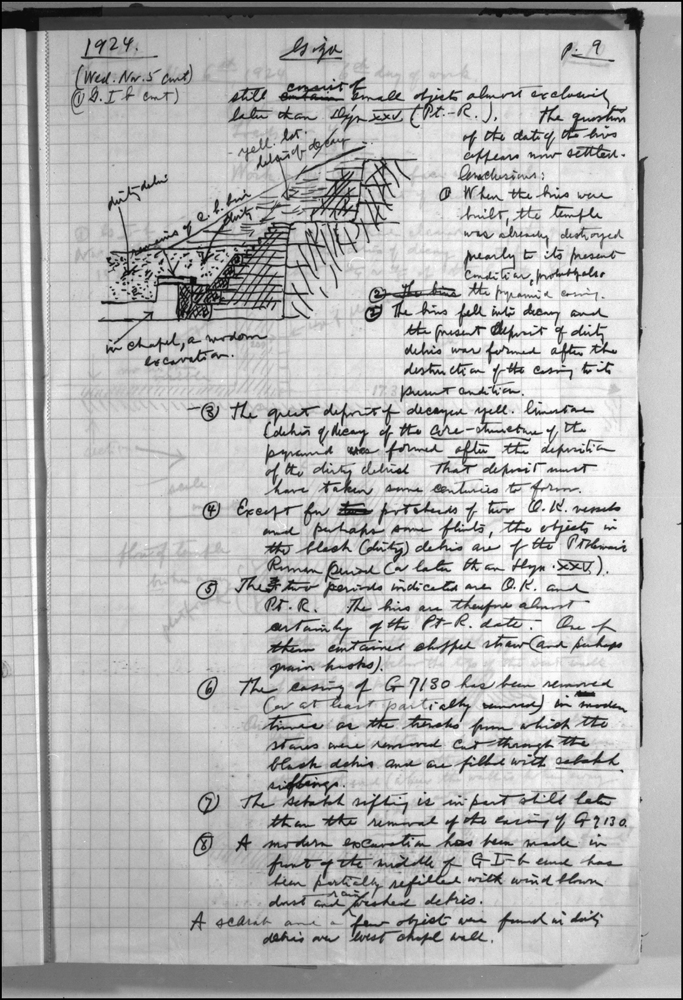 The question of the date of the bins appears now settled.

Conclusions:
1) When the bins were built, the temple was already destroyed nearly to its present condition, probably also the pyramid casing.
2) The bins fell into decay and the present deposit of dirty debris was formed after the destruction of the casing to its present condition.
3) The great deposit of decayed yellow limestone debris and decay of the core-structure of the pyramid was formed after the deposition of the dirty debris. That deposit must have taken some centuries to form. [Later: It was subsequently proved that this debris resulted first from the breaking of stone by the local inhabitants and was then modified by weather. The period of formation was as near as I can learn about two centuries.]
4) Except for potsherds of two Old Kingdom vessels and perhaps some flints, the objects in the black (dirty) debris are of the Ptolemaic-Roman period (or later than Dynasty 25).
5) The two periods indicated are Old Kingdom and Ptolemaic-Roman. The bins [on the floor of which the dirty debris rests] are therefore almost certainly of the Ptolemaic-Roman date. One of them contained chopped straw (and perhaps grain husks).
6) The casing of G 7130 has been removed (or at least partially removed) in modern times as the trenches from which the stones were removed cut through the black debris and are filled with sebbakh siftings.
7) The sebbakh sifting is in part still later than the removal of the casing of G 7130.
8) A modern excavation has been made in front of the middle of G I-b and has been partially refilled with wind blown dust and rain-washed debris.
A scarab and a few objects were found in dirty debris over west chapel wall.