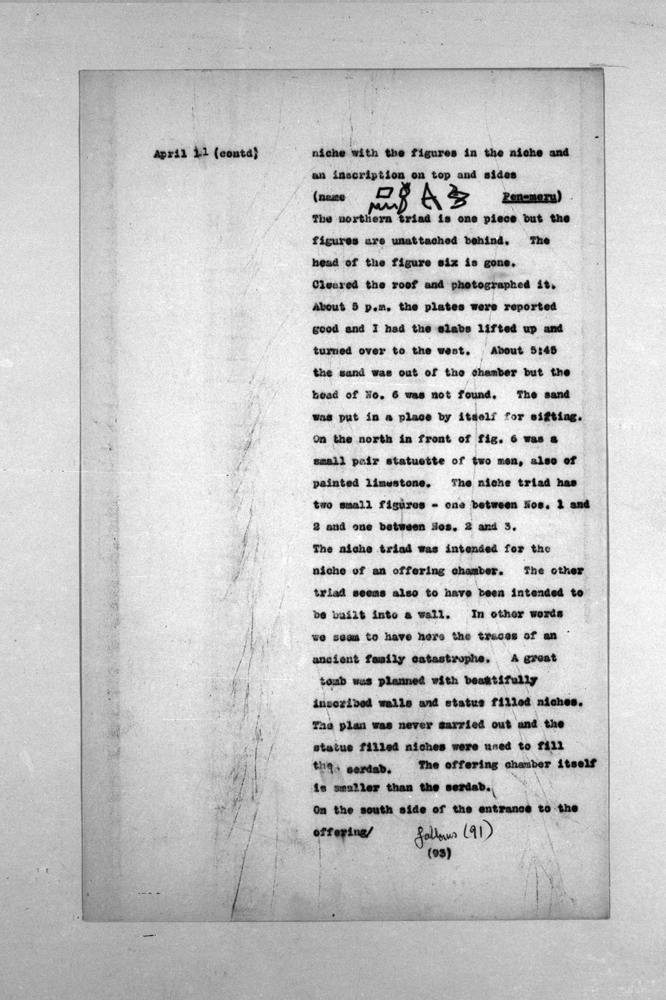 The northern triad [MFA 12.1504] is one piece but the figures are unattached behind. The head of the figure six is gone.

Cleared the roof and photographed it. About 5 p.m. the plates were reported good and I had the slabs lifted up and turned over to the west. About 5:45 the sand was out of the chamber but the head of No. 6 was not found. The sand was put in a place by itself for sifting.
On the north in front of fig. 6 was a small pair statuette of two men [JE 43753], also of painted limestone.
The niche triad [MFA 12.1484] has two small figures - one [Seshemnefer] between Nos. 1 [Penmeru] and 2 [Penmeru] and one [Neferseshemes] between Nos. 2 [Penmeru] and 3 [Meretites].
The niche triad was intended for the niche of an offering chamber. The other triad [MFA 12.1504] seems also to have been intended to be built into a wall. In other words we seem to have here the traces of an ancient family catastrophe. A great tomb was planned with beautifully inscribed walls and statue filled niches. The plan was never carried out and the statue filled niches were used to fill the serdab. The offering chamber itself is smaller than the serdab.
On the south side of the entrance to the offering