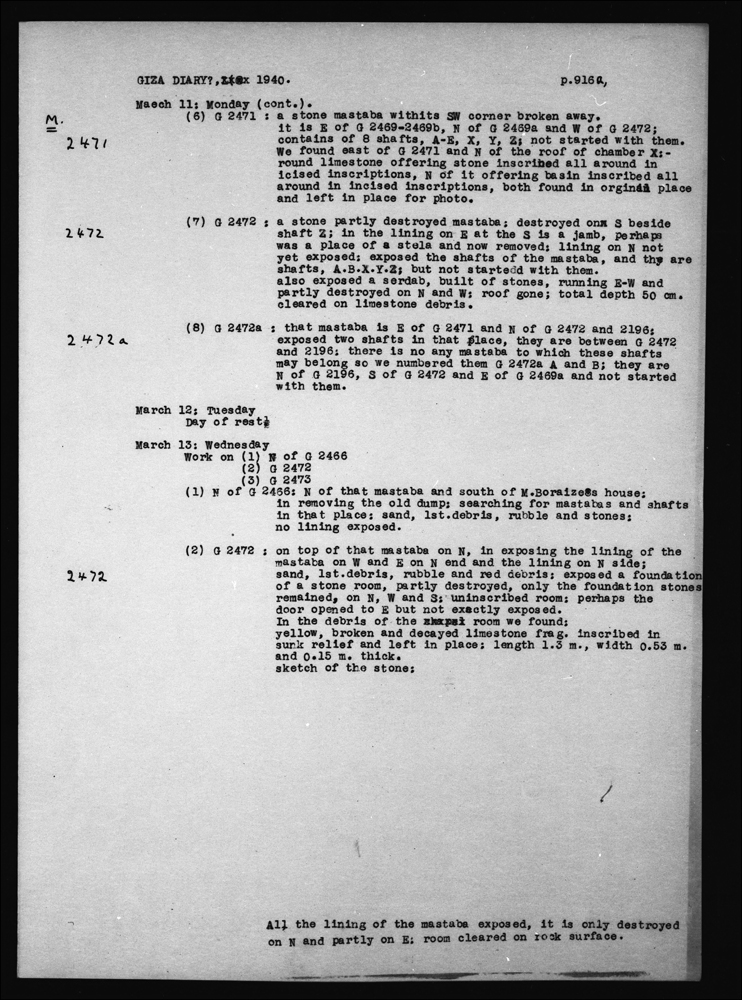 (6) G 2471
A stone mastaba with its southwest corner broken away. It is east of G 2469 - G 2469b, north of G 2469a and west of G 2472; contains of eight shafts, A-E, X, Y, Z; not started with them. We found east of G 2471 and north of the roof of the chamber X. Round limestone offering stone inscribed all around in incised inscriptions, north of it offering basin inscribed all around in incised inscriptions, both found in original place and left in place for photo.

(7) G 2472
A stone partly destroyed mastaba. Destroyed on south beside shaft Z; in the lining on east at the south is a jamb, perhaps was a place of a stele and now removed. Lining on north not yet exposed. Exposed the shafts of the mastaba, and they are shafts, A, B, X, Y, Z; but not started in them. Also exposed a serdab, built of stones, running east-west and partly destroyed on north and west. Roof gone; total depth 50 centimeters. Cleared on limestone debris.

(1) North of G 2465
North of that mastaba and south of M. Boraize's house [Baraize]. In removing the old dump. Searching for mastabas and shafts in that place. Sand, limestone debris, rubble and stones. No lining exposed.

(2) G 2472
On top of that mastaba on north, in exposing the lining of the mastaba on west and east on north end and the lining on north side. Sand, limestone debris, rubble and red debris. Exposed a foundation of a stone room, partly destroyed, only the foundation stones remained, on north, west and south. uninscribed room. Perhaps the door opened to east but only exactly exposed. In the debris of the room we found. Yellow, broken and decayed limestone fragment inscribed in sunk relief and left in place. Length 1.3 meters, width .53 meters and .15 meters thick. Sketch of the stone.
All the lining of the mastaba exposed, it is only destroyed on north and partly on east. Room cleared on rock surface.