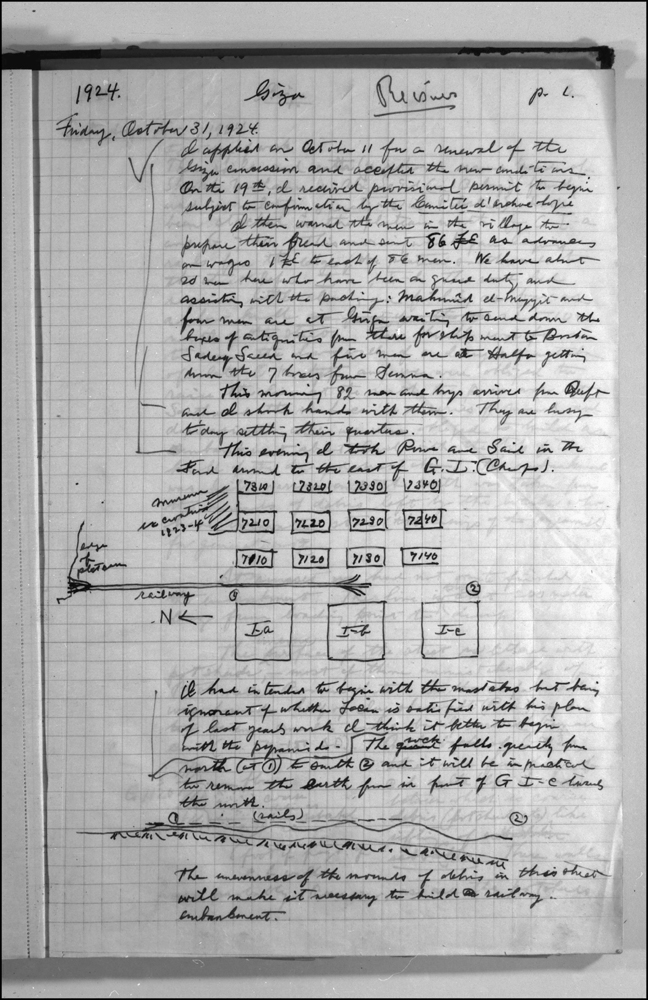 I applied on October 11 for a renewal of the Giza Concession and accepted the new conditions. On the 19th, I received provisional permit to begin [work] subject to confirmation by the Comitie d'archaelogie .
I then warned the men in the village [of Quft] to prepare their bread and sent LE 86 (Egyptian pounds) as advances on wages. 1 LE (Egyptian pound) to each of eighty six men. We have about twenty men here who have been on general duty and assisting with the packing. Mahmud el Meyyit and four men are at Girga waiting to send down the boxes of antiquities from there for shipment to Boston. Sadeeq Saied and his five men are at Halfa getting down the seven boxes from Semna.
This morning eighty two men and boys arrived from Quft and I shook hands with them. They are busy today setting their quarters.
This evening I took Rowe and Said Ahmed in the Ford around to the east of G I (Khufu Pyramid).

I had intended to begin with the mastabas but being ignorant of whether Lacau is satisfied with his plan of last year's [government] work I think it better to begin with the pyramids. The rock [basis] falls greatly from north (at (1)) to south (2) and it will be impractical to remove the earth from in front of G I-c towards the north.

The unevenness of the mounds of debris in this street [G 7000] make it necessary to build a railway embankment.