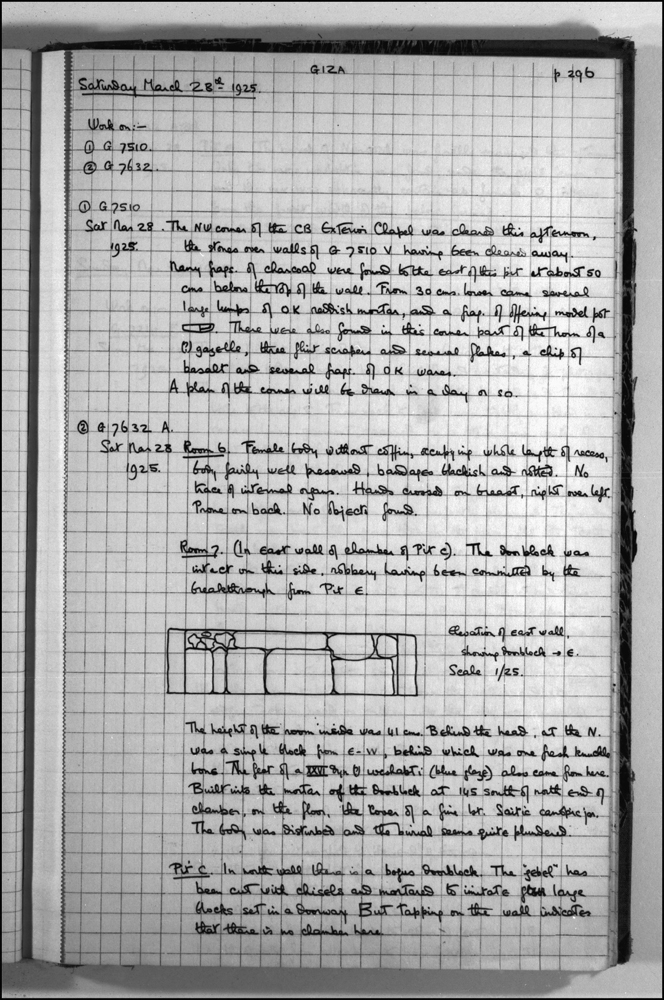 (1) G 7510
The northwest corner of the crude brick exterior chapel was cleared this afternoon, the stones over walls of G 7510 V having been cleared away. Many fragments of charcoal were found to the east of this pit at about 50 cm below the top of the wall. From 30 cm lower came several large lumps of Old Kingdom reddish mortar, and a fragment of offering model pot [ILLUSTRATION]. These were also found in this corner part of the horn of a (?) gazelle, three flint scrapers and several flakes, a chip of basalt and several fragments of Old Kingdom wares.
A plan of the corner will be drawn in a day or so.

G 7232 A Room 7. (In east wall of chamber of pit C [sub-pit c= A VI]). The doorblock was intact on this side, robbery having been committed by the breakthrough from pit E [sub-pit E = A IX].

The height of the room inside was 41 cm. Behind the head, at the north was a simple block from east-west, behind which was one fresh knuckle bone. The feet of a Dynasty 26(?) ushabti (blue glaze) [25-6-70] also came from here. Built into the mortar of the doorblock at 145 south of north end of chamber, on the floor, the cover of a fine limestone Saitic canopic jar [25-6-67]. The body was disturbed and the burial seems quite plundered.

G 7232 A Pit C [sub=it c = A VI]. In the north wall there is a bogus doorblock. The "gebel" has been cut with chisels and mortared to imitate four large blocks set in a doorway. But tapping on the wall indicates that there is no chamber here.