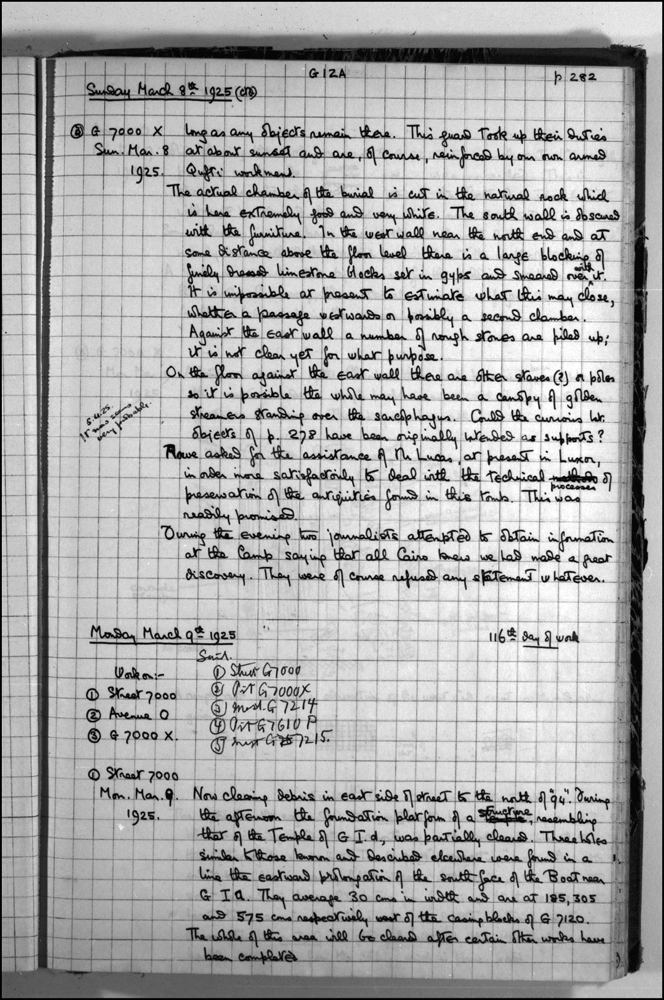 (3) G 7000 X (continued)
long as any objects remain there. This guard took up their duties at about sunset and, of course, reinforced by our own armed Qufti workmen.

The actual chamber of the burial is cut in the natural rock which is here extremely good and very white. The south wall is obscured with the furniture. In the west wall near the north end and at some distance above the floor level there is a large blocking of finely dressed limestone blocks set in gyps (= gypsum) and smeared over with it. It is impossible at present to estimate what this may close, whether a passage westwards or possibly a second chamber.
Against the east wall a number of rough stones are piled up; it is not clear yet for what purpose.
On the floor against the east wall there are other staves (?) or poles so it is possible the whole may have been a canopy of golden streamers standing over the sarcophagus. Could the curious limestone objects of [Friday, March 6, No. 6 // GAR] have been originally intended as supports(?) [April 5, 1925 It now seems very probable T. R. D. G]

Rowe asked for the assistance of Mr. Lucas, at present in Luxor, in order more satisfactorily to deal with the technical processes of preservation of the antiquities found in this tomb. This was readily promised.
During the evening two journalists attempted to obtain information at the Camp saying that all Cairo knew we had made a great discovery. They were of course refused any statement whatever.

(1) Street G 7000
Now clearing debris in east side of street to the north of "94." During the afternoon the foundation platform of a structure, resembling that of the temple of G I-d, was partially cleared. Three holes similar to those known and described elsewhere were found in a line the eastward prolongation of the south face of the boat near G I-a. They average 30 cm in width and are at 185, 305 and 575 cm respectively west of the casing blocks of G 7120.
The whole of this area will be cleared after certain other works have been completed.