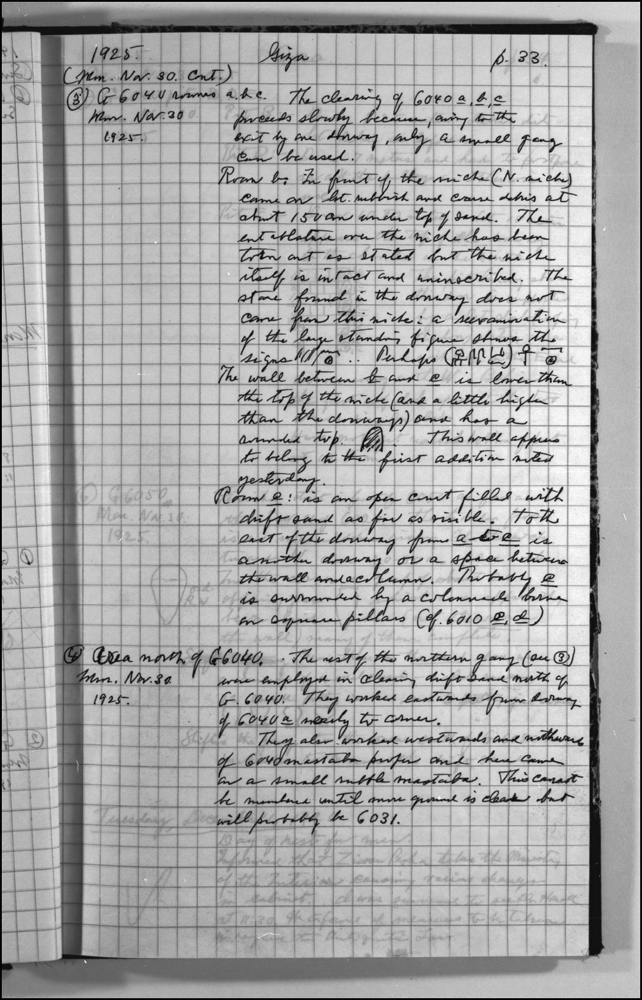 (3) G 6040
G 6040 rooms a, b, c: The clearing of G 6040 a, b, c proceeds slowly because, owing to the exit of one doorway, only a small gang can be used.
Room b: In front of the niche (north niche) came on limestone rubbish and coarse debris at about 150 cm under top of sand. The entablature over the niche has been torn out as stated but the niche itself is intact and uninscribed. The stone found in the doorway does not come from this niche: a reexamination of the large standing figure shows the signs [GLYPHS]. Perhaps [GLYPHS] [Shepseskafankh].
The wall between b and c is lower than the top of the niche (and a little higher than the doorways) and has a rounded top. [ILLUSTRATION] This wall appears to belong to the first addition noted yesterday.
Room c: is an open court filled with drift sand as far as visible. To the east of the doorway from a to c is another doorway or a space between the wall and a column. Probably c is surrounded by a colonnade born on square pillars (cf. G 6010 c, d)

(4) G 6040 (north of)
The rest of the northern gang (see 3) were employed in clearing drift sand north of G 6040. They worked eastwards from doorway of G 6040a nearly to corner.
They also worked westwards and northwards of G 6040 mastaba proper and here came on a small rubble mastaba. This cannot be numbered until more ground is cleared but will probably be G 6031.