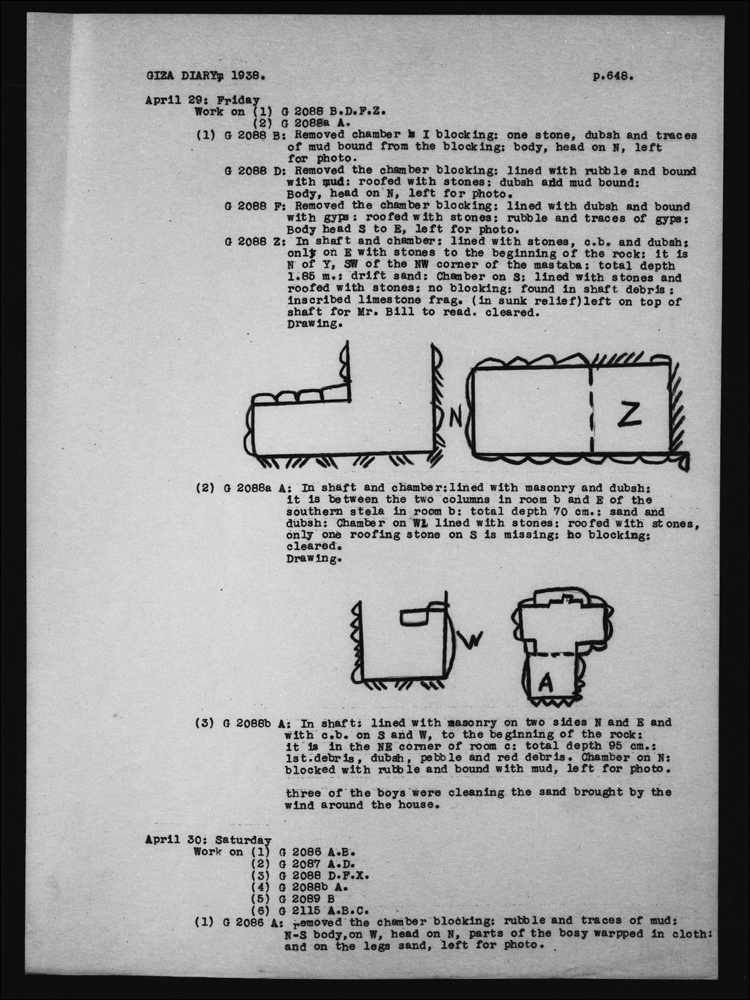 G 2088 F: Removed the chamber blocking. Lined with dubsh and bound with gypsum. Roofed with stones. Rubble and traces of gypsum. Body, head south to east. left for photo.

G 2088 Z: In shaft and chamber. Lined with stones, crude brick and dubsh. Only on east with stones to the beginning of the rock. It is north of Y, southwest of the northwest corner of the mastaba. Total depth 1.85 meters. Drift sand. Chamber on south. Lined with stones and roofed with stones. No blocking. Found in shaft debris: inscribed limestone fragment (in sunk relief) left on top of shaft for Mr. Bill to read. Cleared. Drawing.

(2) G 2088a
G 2088a A: In shaft and chamber. Lined with masonry and dubsh. It is between the two columns in room b and east of the southern stela in room b. Total depth 70 cm. Sand and dubsh. Chamber on west lined with stones. Roofed with stones, only one roofing stone on south is missing. No blocking. Cleared. Drawing.

(3) G 2088b
G 2088b A: In shaft. Lined with masonry on two sides north and east and crude brick on south and west, to the beginning of the rock. It is in the northeast corner of room c. Total depth 95 cm. Limestone debris, dubsh, pebble and red debris. Chamber on north. Blocked with rubble and bound with mud. Left for photo.

Three of the boys were cleaning the sand brought by the wind around the house.

(1) G 2086
G 2086 A: Removed the chamber blocking. Rubble and traces of mud. North-south body, on west, head on north, parts of the body wrapped in cloth, and on the legs sand. Left for photo.