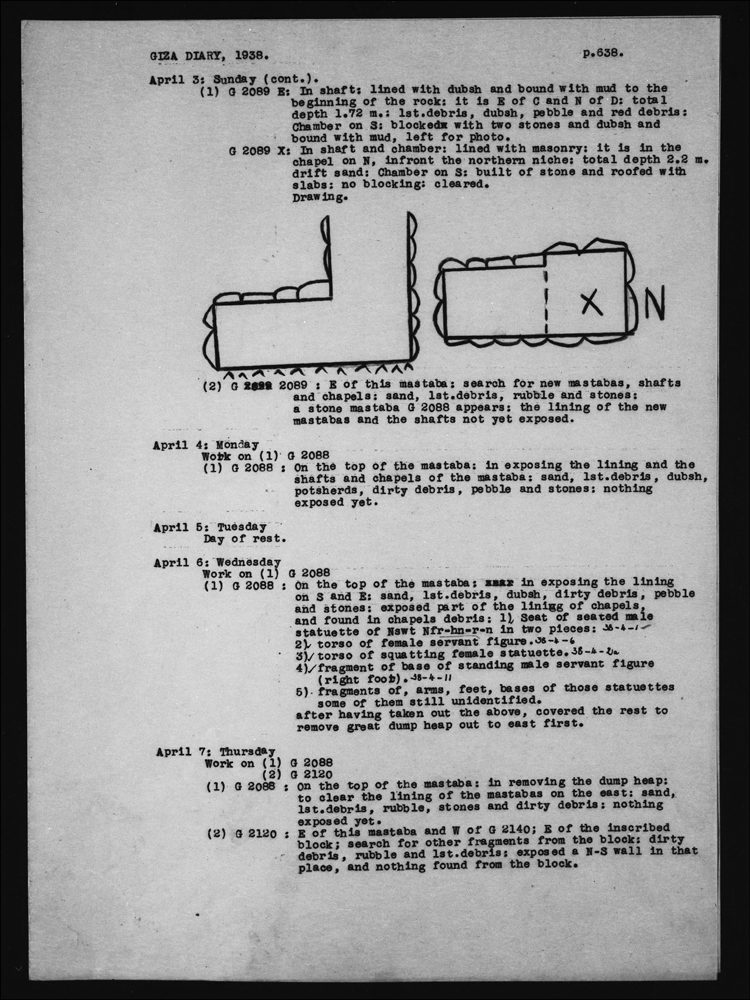 G 2089 X: In shaft and chamber. Lined with masonry. It is in the chapel on north. In front the northern niche. Total depth 2.2 meters. Drift sand. Chamber on south. Built of stone and roofed with slabs. No blocking. Cleared. Drawing.

(2) East of G 2089
East of this mastaba. Search for new mastabas, shafts and chapels. Sand, limestone debris, rubble and stones. A stone mastaba G 2088 appears. The lining of the new mastabas and the shafts not yet exposed.

(1) G 2088
On the top of the mastaba. In exposing the lining and the shafts and chapels of the mastaba. Sand, limestone debris, dubsh, potsherds, dirty debris, pebble and stones. Nothing exposed yet.

(1) G 2088
On the top of the mastaba. In exposing the lining on south and east. Sand, limestone debris, dubsh, dirty debris, pebble and stones. Exposed part of the lining of chapels, and found in chapel debris:
1) Seat of seated males statuette of Nswt Nfr-hn-r-n [Neferkhennisut] in two pieces. 38-4-1.
2) Torso of female servant figure. 38-4-6.
3) Torso of squatting female statuette. 38-4-2a.
4) Fragment of base of standing male servant figure (right foot). 38-4-11.
5) Fragments of arms, feet, bases of those statuettes some of them still unidentified.

After having taken out the above, covered the rest to remove great dump heap out to east first.

(1) G 2088
On the top of the mastaba. In removing the dump heap to clear the lining of the mastabas on the east. Sand, limestone debris, rubble, stones and dirty debris. Nothing exposed yet.

(2) East of G 2120
East of this mastaba and west of G 2140. East of the inscribed block. Search for other fragments from the block. Dirty debris, rubble and limestone debris. Exposed a north-south wall in that place, and nothing found from the block.