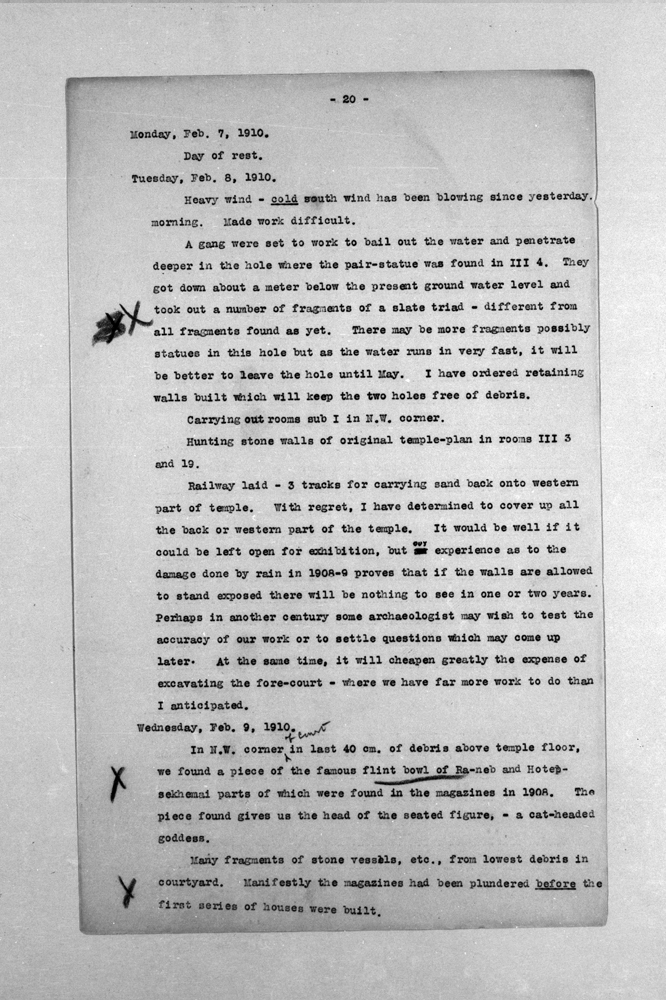 A gang were set to work to bail out the water and penetrate deeper in the hole where the pair statue was found in III 4. They got down about a meter below the present ground water level and took out a number of fragments of a slate triad - different from all fragments found as yet. There may be more fragments possibly statues in this hole but as the water runs in very fast, it will be better to leave the hole until May. I have ordered retaining walls built which will keep the two holes free of debris.

Carrying out rooms sub I in northwest corner.
Hunting stone walls of original temple-plan in rooms III 3 and 19.

Railway laid - three tracks for carrying sand back onto western part of temple. With regret, I have determined to cover up all the back or western part of the temple. It would be well if it could be left open for exhibition, but our experience as to the damage done by rain in 1908-9 proves that if the walls are allowed to stand exposed there will be nothing to see in one or two years. Perhaps in another century some archaeologist may wish to test the accuracy of our work or to settle questions which may come up later. At the same time, it will cheapen greatly the expense of excavating the fore court - where we have far more work to do than I anticipated.

In northwest corner of court in last 40 cm of debris above temple floor, we found a piece of the famous flint bowl of Ra-neb and Hotep-sekhemai parts of which were found in the magazines in 1908. The piece four gives us the head of the seated figure, a cat-headed goddess.

Many fragments of stone vessels, etc. from lower debris in courtyard. Manifestly the magazines had been plundered before the first series of houses were built.