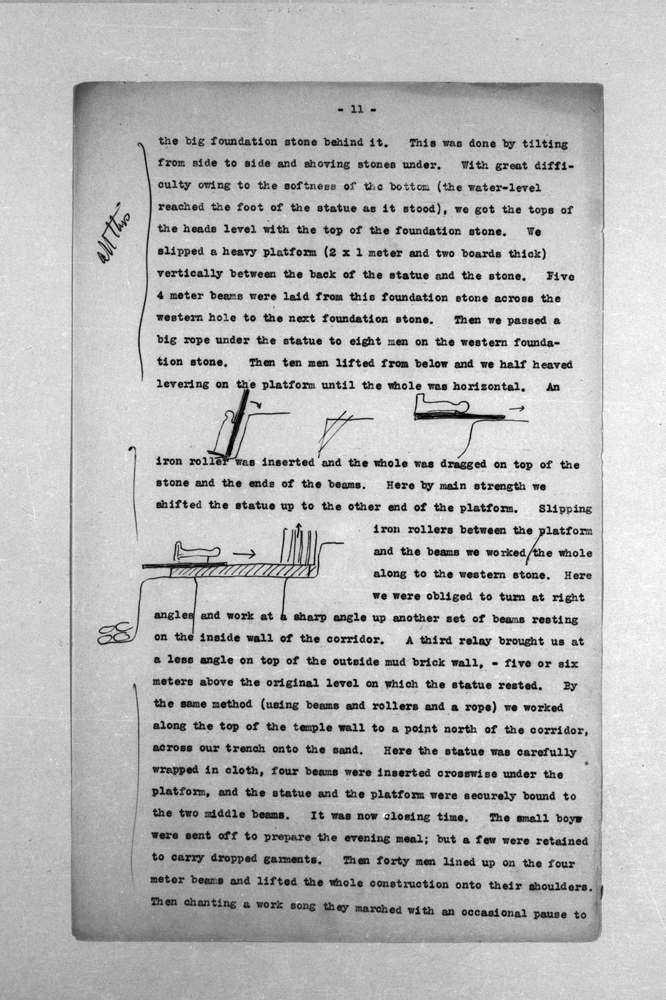 the big foundation stone behind it. This was done by tilting from side to side and shoving stones under. With great difficulty owing to the softness of the bottom (the water level reached the foot of the statue as it stood), we got the tops of the heads level with the top of the foundation stone. Five 4 meter beams were laid from this foundation stone across the western hole to the next foundation stone. Then we passed a big rope under the statue to eight men on the western foundation stone. Then ten men lifted from below and we half heaved levering on the platform until the whole was horizontal. An [ILLUSTRATION] iron roller was inserted and the whole was dragged on top of the stone and the ends of the beams. Here by main strength we shifted the statue up to the other end of the platform. [ILLUSTRATION] Slipping iron roller between the platform and the beams we worked the whole along to the western stone. Here we were obliged to turn at right angles and work at a sharp angle up another set of beams resting on the inside wall of the corridor. A third relay brought us at a less angle on top of the outside mud brick wall, 5 or 6 meters above the original level on which the statue rested. By the same method (using beams and rollers and a rope) we worked along the top of the temple wall to a point north of the corridor, across our trench onto the sand. Here the statue was carefully wrapped in cloth, four beams were inserted crosswise under the platform, and the statue and the platform were securely bound to the two middle beams. It was now closing time. The small boys were sent off to prepare the evening meal; but a few were retained to carry dropped garments. Then forty men lined up on the 4 meter beams and lifted the whole construction onto their shoulders. Then chanting a work song they marched with an occasional pause to