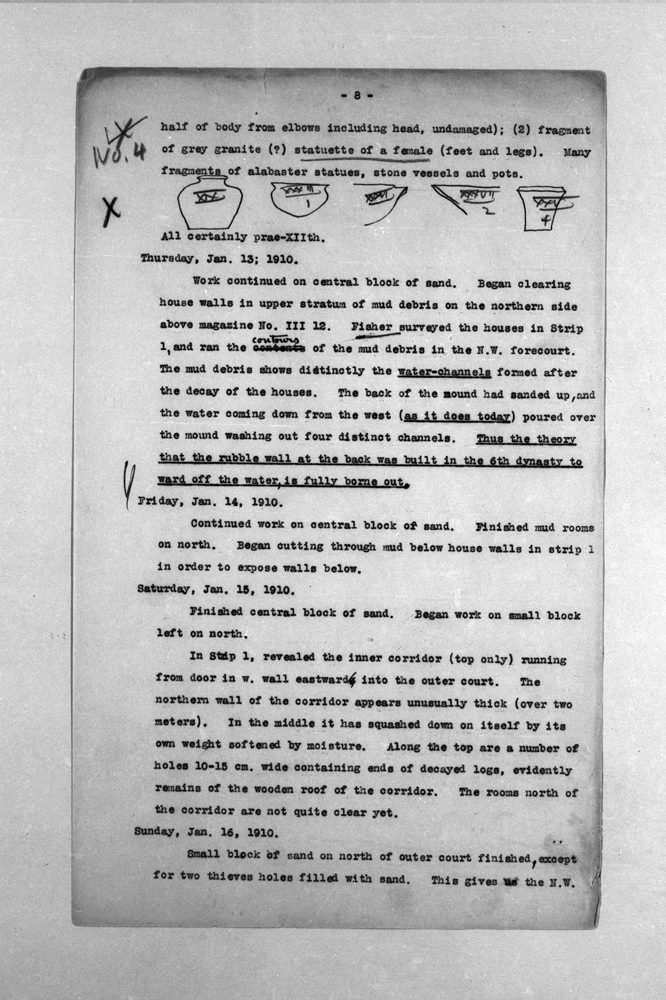 half of body from elbows including head, undamaged); (2) fragment of gray granite (?) statuette of a female [margin note in red] (no. 4 [= published no. 41 = MFA 11.728a-c]) [end margin note] (feet and legs). Many fragments of alabaster statues, stone vessels and pots. [ILLUSTRATION] All certainly pre-XIIth.

Work continued on central block of sand. Began clearing house walls in upper stratum of mud debris on the northern side above magazine no. III 12. Fisher surveyed the houses in strip 1, and ran the contours of the mud debris in the northwest fore court. The mud debris shows distinctly the water channels formed after the decay of the houses. The back of the mound had sanded up, and the water coming down from the west (as it does today) poured over the mound, washing out four distinct channels. Thus the theory that the rubble wall at the back was built in Dynasty 6 to ward off the water, is fully borne out.

Continued work on central block of sand. Finished mud rooms on north. Began cutting through mud below house walls in strip 1 in order to expose walls below.

Finished central block of sand. Began work on small block left on north. In strip 1, revealed the inner corridor (top only) running from door in west wall eastward into the outer court. The northern wall of the corridor appears unusually thick (over two meters). In the middle it has squashed down on itself by its own weight softened by moisture. Along the top are a number of holes 10-15 cm wide containing ends of decayed logs, evidently remains of the wooden roof of the corridor. The rooms north of the corridor are not quite clear yet.

Small block of sand on north of outer court finished, except for two thieves holes filled with sand. This gives us the northwest