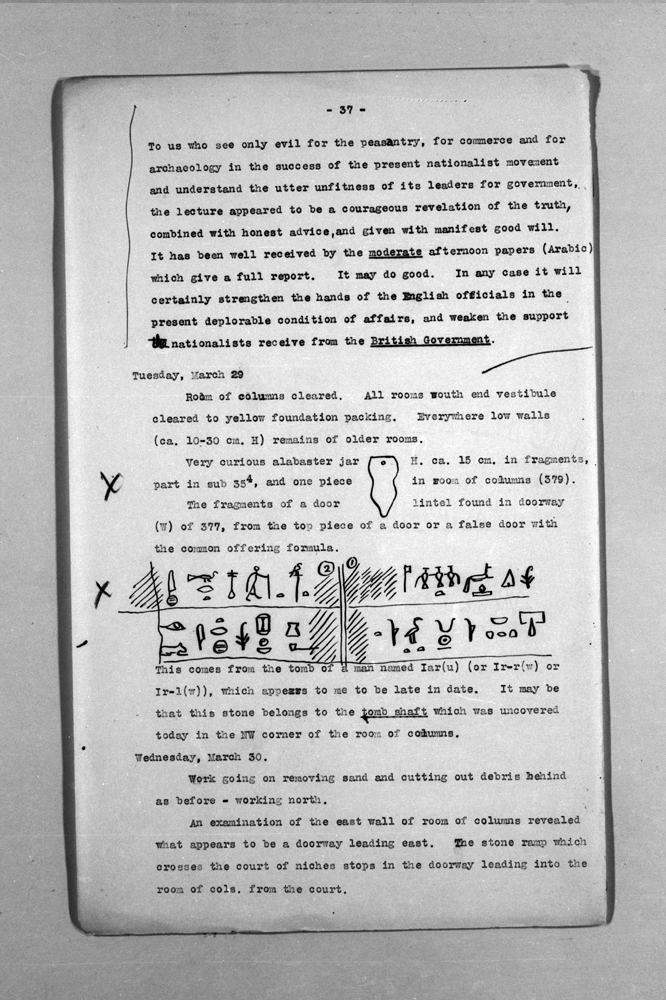 To us who see only evil for the peasantry, for commerce and for archaeology in the success of the present nationalist movement and understand the utter unfitness of its leaders for government, the lecture appeared to be a courageous revelation of the truth, combined with honest advice, and given with the manifest good will. It has been well received by the moderate afternoon papers (Arabic) which give a full report. It may do good. In any case it will certainly strengthen the hands of the English officials in the present deplorable condition of affairs, and weaken the support the nationalists receive from the British government.

Room of columns cleared. All rooms south end vestibule cleared to yellow foundation packing. Everywhere low walls (ca. 10-30 cm height) remains of older rooms.
Very curious alabaster jar [MFA 11.454] [ILLUSTRATION] height ca. 15 cm in fragments, part in sub 354, and one piece in room of columns (379).
The fragments of a door lintel found in doorway (west) of 377, from the top piece of a door or a false door with the common offering formula.
[ILLUSTRATION with GLYPHS] [see photos C2868 and C2869]
This comes from the tomb of a man named Iar(u) (or Ir-r(w) or Ir-l(w)), which appears to me to be late in date. It may be that this stone belongs to the tomb shaft which was uncovered today in the NW corner of the room of columns.