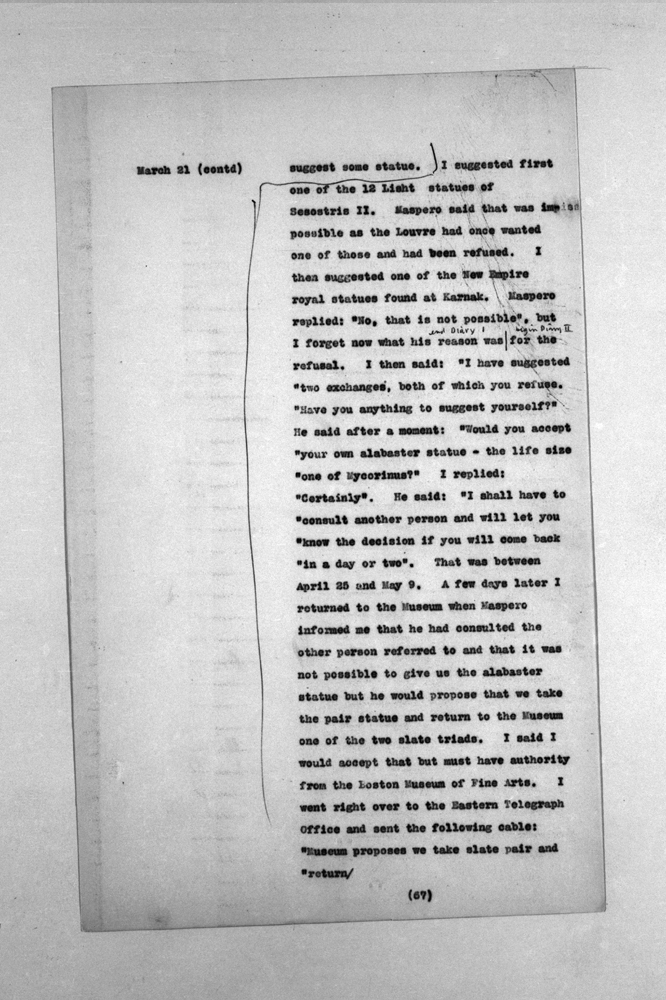 some statue. I suggested first one of the twelve Lisht statues of Sesostris II. Maspero said that was impossible as the Louvre had once wanted one of those and had been refused. I then suggested one of the New Kingdom royal statues found at Karnak. Maspero replied, "No, that is not possible", but I forget now what his reason was for the refusal. I then said, "I have suggested two exchanges, both of which you refuse. Have you anything to suggest yourself?". He said after a moment, "Would you accept your own alabaster statue, the life-size one of Menkaure?" I replied, "Certainly". He said, "I shall have to consult another person and will let you know the decision if you will come back in a day or two." That was between April 25 and May 9. A few days later I returned to the museum when Maspero informed me that he had consulted the other person referred to and that it was not possible to give us the alabaster statue but he would propose that we take the pair statue [Menkaure greywacke pair statue = published no. 17 = 10-1-16 = MFA 11.1738] and return to the museum one of the two slate triads [MFA 09.201 deaccessioned back to Cairo]. I said I would accept that but must have authority from the Boston Museum of Fine Arts. I went right over to the Eastern Telegraph Office and sent the following cable: "Museum proposes we take slate pair and return