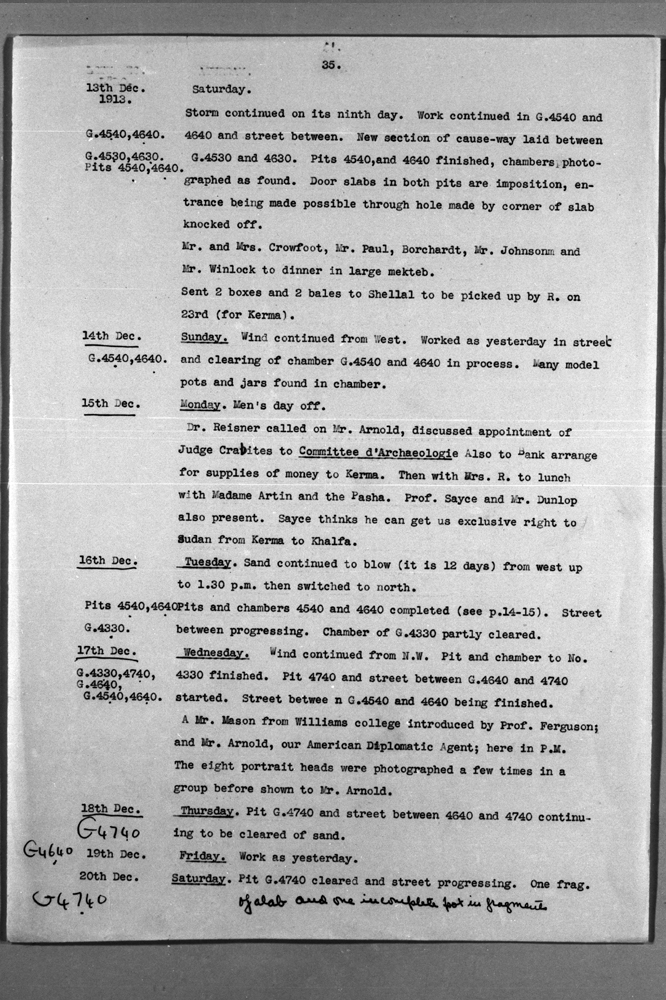 Storm continued on its ninth day.

Work continued in G 4540 and G 4640 and street between.
New section of causeway laid between G 4530 and G 4630.
Pits G 4540 and G 4640 finished, chambers photographed as found. Door slabs in both pits are in position, entrance being made possible through hole made by corner of slab knocked off.

Sent two boxes and two bales to Shellal to be picked up by R. on 23rd (for Kerma).

Wind continued from West.
Worked as yesterday in street and clearing of chamber G 4540 and G 4640 in process. Many model pots and jars found in chamber.

Men's day off.
Dr. Reisner called on Mr. Arnold, discussed appointment of Judge Crabites to Committee d'Archaeologie. Also to Bank to arrange for supply of money to Kerma. Then with Mrs. Reisner to lunch with Madame Artin and the Pasha. Prof. Sayce and Mr. Dunlop also present. Sayce thinks he can get us exclusive right to Sudan from Kerma to Khalfa.

A Mr. Manson from Williams College introduced by Prof. Ferguson; and Mr. Arnold, our American Diplomatic Agent; here in p.m.
The eight portrait heads were photographed a few times in a group before shown to Mr. Arnold.