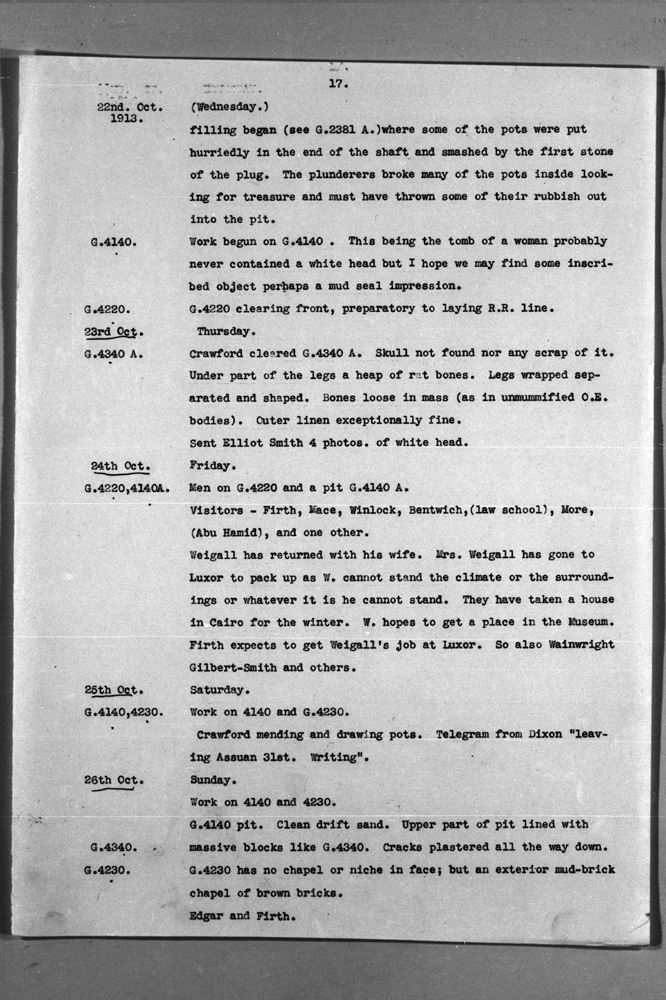 [G 4340 (continued)]
filling began (see G 2381 A where some of the pots were put hurriedly in the end of the shaft and smashed by the first stone of the plug.) The plunderers broke many of the pots inside looking for treasure and must have thrown some of their rubbish out into the pit.

Work begun on G 4140. This being the tomb of a woman it probably never contained a white head but I hope we may find some inscribed object perhaps a mud seal impression.

Crawford cleared G 4340 A. Skull not found nor any scrap of it. Under part of the legs a heap of rat bones. Legs wrapped separated and shaped. Bones loose in mass (as in unmummified Old Kingdom bodies). Outer linen exceptionally fine.

Weigall has returned with his wife. Mrs. Weigall has gone to Luxor to pack up as Weigall cannot stand the climate or the surroundings or whatever it is he cannot stand. They have taken a house in Cairo for the winter. Weigall hopes to get a place in the Museum. Firth expects to get Weigall's job at Luxor. So also Wainwright, Gilbert-Smith and others.

G 4230 has no chapel or niche in face; but an exterior mud-brick chapel of brown bricks.