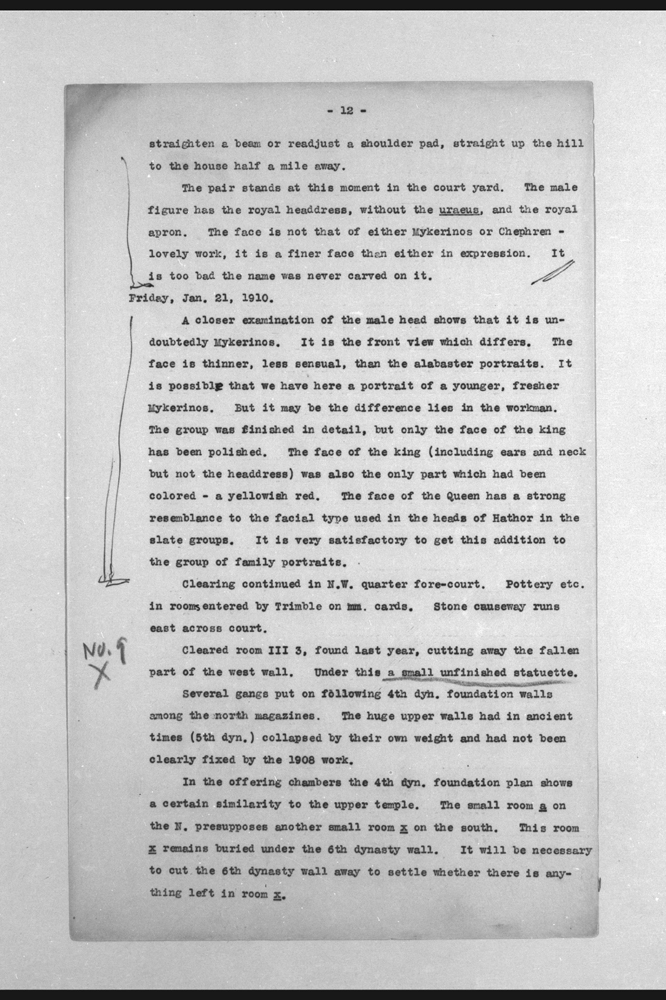 straighten a beam or readjust a shoulder pad, straight up the hill to the house half a mile away.

The pair stands at this moment in the court yard. The male figure has the royal headdress, without the uraeus, and the royal apron. The face is not that of either Menkaure or Khafre - lovely work, it is a finer face than either in expression. It is too bad the name was never carved on it.

A closer examination of the male head shows that it is undoubtedly Menkaure. It is the front view which differs. The face is thinner, less sensual, than the alabaster portraits. It is possible that we have here a portrait of a younger, fresher Menkaure. But it may be the difference lies in the workman. The group was finished in detail, but only the face of the king has been polished. The face of the king (including ears and neck but not the headdress) was also the only part which had been colored - a yellowish red. The face of the queen has a strong resemblance to the facial type used in the heads of Hathor in the slate groups. It is very satisfactory to get this addition to the group of family portraits.

Cleared room III 3, found last year, cutting away the fallen part of the west wall. Under this a small unfinished statuette [end in red]. [margin note in red] no. 9 [= published no. 28] [end margin note in red]

Several gangs put on following Dynasty 4 foundation walls among the north magazines. The huge upper walls had in ancient times (Dynasty 5) collapsed by their own weight and had not been clearly fixed by the 1908 work.

In the offering chambers Dynasty 4 foundation plan shows a certain similarity to the upper temple. The small room a on the north presupposes another small room x on the south. This room x remains buried under the Dynasty 6 wall. It will be necessary to cut the Dynasty 6 wall away to settle whether there is anything left in room x.