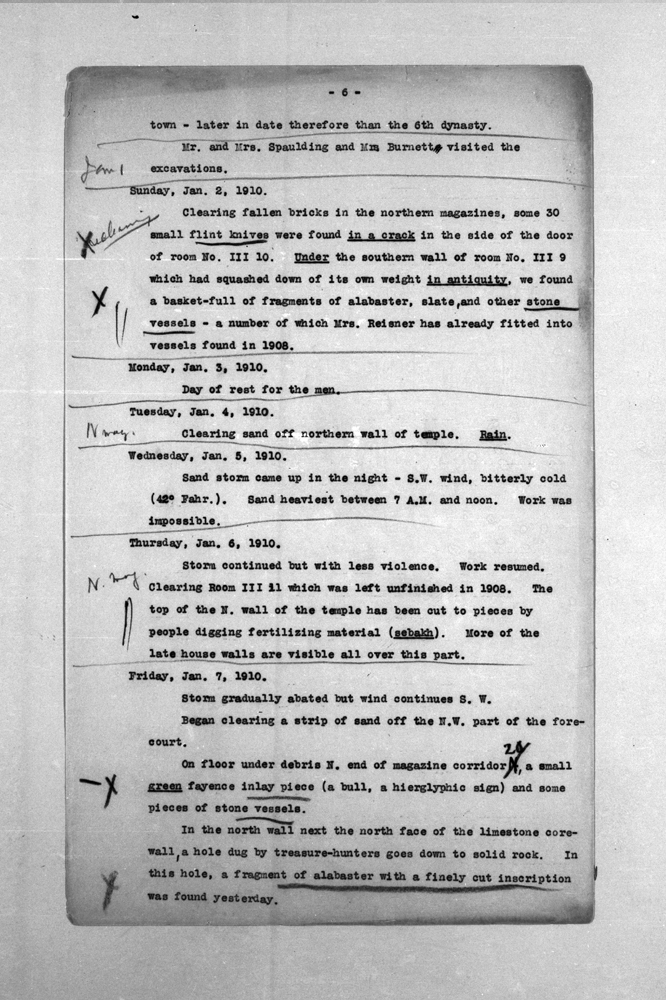 Mr. and Mrs. Spaulding and Mrs. Burnett visited the excavations.

Clearing fallen bricks in the northern magazines, some thirty small flint knives[end in blue underline] were found in a crack in the side of the door of room no. III 10. Under the southern wall of room no. III 9, which had squashed down of its weight in antiquity, we found a basket-full of fragments of alabaster, slate and other stone vessels[end in blue underline] - a number of which Mrs. Reisner has already fitted into vessels found in 1908.

Day of rest for the men.

Storm continued but with less violence. Work resumed.
Clearing room III 11 which was left unfinished in 1908. The top of the north wall of the temple has been cut to pieces by people digging fertilizing materials (sebbakh). More of the late house walls are visible all over this part.

Storm gradually abated but wind continues southwest.
Began clearing a strip of sand of the northwest part of the fore court.
On floor under debris north end of magazine corridor 20, a small green faience inlay piece (a bull, a hieroglyphic sign) and some pieces of stone vessels.
In the north wall next to the north face of the limestone core wall, a hole dug by treasure hunters goes down to solid rock. In this hole, a fragment of alabaster with a finely cut inscription [MFA 11.716c] was found yesterday.