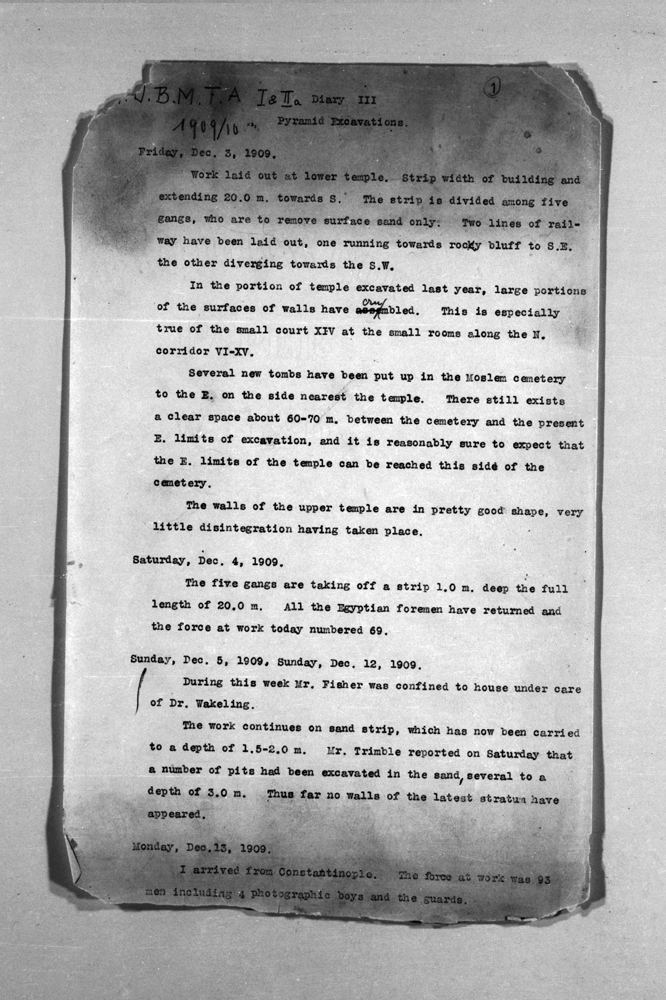 Work laid out at lower temple. Strip width of building and extending 20 meters towards south. The strip is divided among five gangs, who are to remove surface sand only. Two lines of railway have been laid out, one running towards rocky bluff to southeast the other diverging towards the southwest.
In the portion of temple excavated last year, large portions of the surfaces of walls have crumbled. This is especially true of the small court XIV at the small rooms along the north corridor VI-XV.

Several new tombs have been put up in the Moslem cemetery to the east on the side nearest the temple. There still exists a clear space about 60-70 meters between the cemetery and the present east limits of excavation, and it is reasonably sure to expect that the east limits of the temple can be reached this side of the cemetery.

The walls of the upper temple are in pretty good shape, very little disintegration having taken place.

The five gangs are taking off a strip 1 meter deep the full length of 20 meters. All the Egyptian foremen have returned and the force at work today numbered sixty nine.

During this week Mr. Fisher was confined to house under care of Dr. Wakeling.

The work continues on sand strip, which has now been carried to a depth of 1.5 - 2 meters. Mr. Timble reported on Saturday that a number of pits had been excavated in the sand, several to a depth of 3 meters. Thus far no walls of the latest stratum have appeared.

I arrived from Constantinople.
The force at work was ninety three including four photographic boys and the guards.