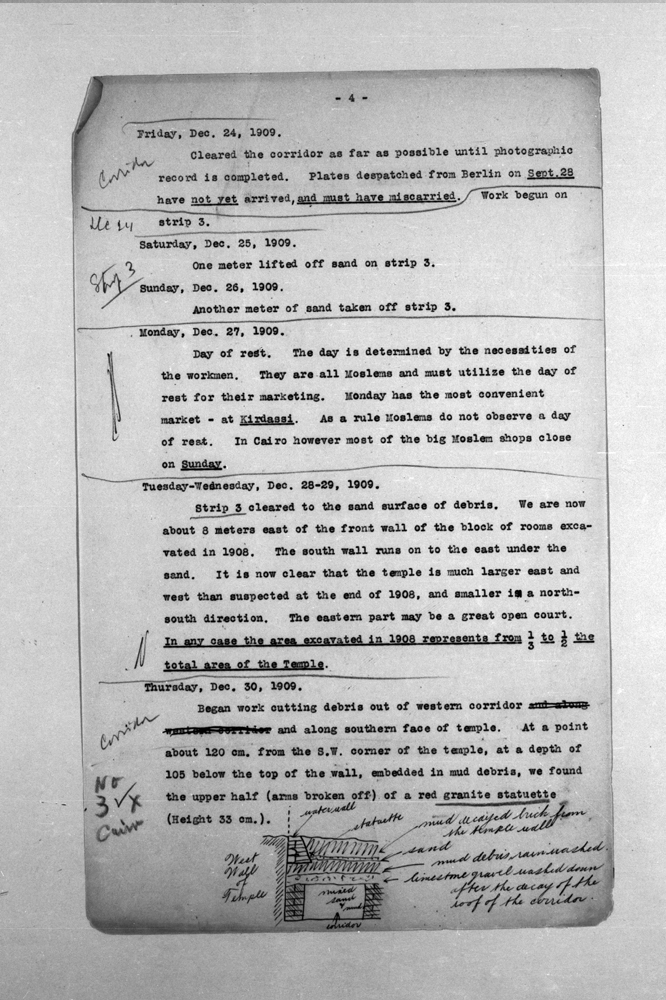 Cleared the corridor as far as possible until photographic record is completed. Plates dispatched from Berlin on September 28 have not yet arrived and must have miscarried. Work begun on strip 3.

1 meter lifted off sand on strip 3.

Another meter taken off strip 3.

Day of rest. The day is determined by the necessities of the workmen. They are all Moslems and must utilize the day of rest for their marketing. Monday has the most convenient market - at Kirdassi. As a rule Moslems do not observe a day of rest. In Cairo however most of the big Moslem shops close on Sunday.

Strip 3 cleared to the sand surface of debris. We are now about 8 meters east of the front wall of the block of rooms excavated in 1908. The south wall runs on to the east under the sand. It is now clear that the temple is much larger east and west than suspected at the end of 1908, and smaller in a north-south direction. The eastern part may be a great open court. In any case the area excavated in 1908 represents from one-third to one-half the total area of the temple.

Began work cutting debris out of western corridor and along southern face of temple. At a point about 120 cm from the southwest corner of the temple, at a depth of 105 below the top of the wall, embedded in mud debris, we found the upper half (arms broken off) of a red granite statuette (height 33 cm). [margin note in red] (no. 3 [= published no. 44] Cairo) [end margin note]