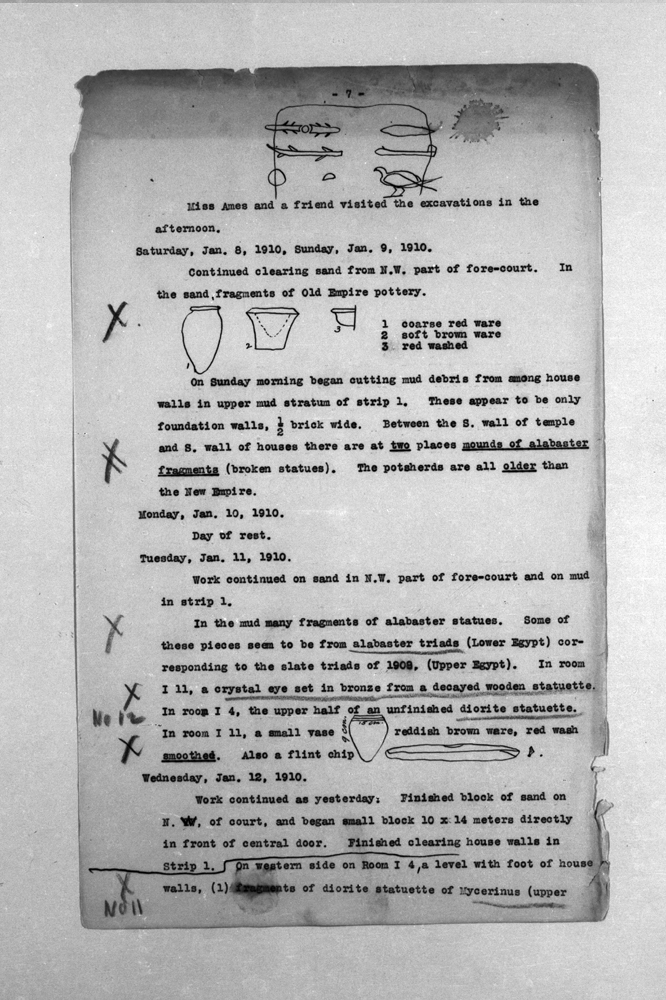 Miss Ames and a friend visited the excavations in the afternoon.

Continued clearing sand from northwest part of fore court. In the sand, fragments of Old Kingdom pottery. [ILLUSTRATION] 1. coarse red ware. 2. soft brown ware. 3. red washed.
On Sunday morning began cutting mud debris from among house walls in upper mud stratum of strip 1. These appear to be only foundation walls, one half brick wide. Between the south wall of temple and south wall of houses there are at two places mounds of alabaster fragments (broken statues). The potsherds are all older then the New Kingdom.

Work continued on sand in northwest part of fore court and on mud strip 1.
In the mud many fragments of alabaster statues. Some of these pieces seem to be from alabaster triads (Lower Egypt) corresponding to the slate triads of 1908 (Upper Egypt). In room I 11, a crystal eye set in bronze from a decayed wooden statuette. In room I 4, the upper half of an unfinished diorite statuette [margin note (no. 12 [= published no. 30])]. In room I 11, a small vase, [ILLUSTRATION] reddish brown ware, red wash smoothed. Also a flint chip [ILLUSTRATION].

Work continued as yesterday. Finished block of sand on northwest of court, and began small block 10 x 14 meters directly in front of central door. Finished clearing house walls in strip 1. On western side of room I 4 a level with foot of house walls, (1) fragments of diorite statuette of Menkaure (upper [margin note in red] (no. 11 [= published no. 36]) [end margin note in red]