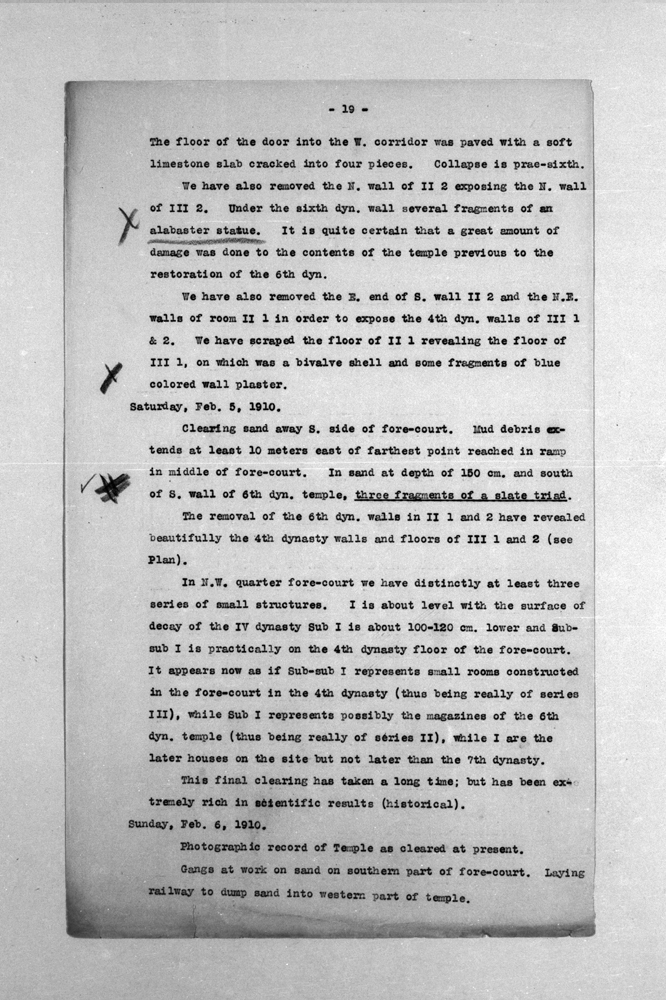 The floor of the door into the west corridor was paved with a soft limestone slab cracked into four pieces. Collapse is pre-Dynasty 6.

We have also removed the north wall of II 2 exposing the north wall of III 2. Under Dynasty 6 wall several fragments of an alabaster statue. It is quite certain that a great amount of damage was done to the contents of the temple previous to the restoration of Dynasty 6.

We have also removed the east end of south wall II 2 and the northeast walls of room II 1 in order to expose the Dynasty 4 walls of III 1 and 2. We have scraped the floor of II 1 revealing the floor of III 1, on which was a bivalve shell and some fragments of blue colored wall plaster.

In sand at depth of 150 cm and south of south wall of Dynasty 6 temple, three fragments of a slate triad.

The removal of the Dynasty 6 walls in II 1 and 2 have revealed beautifully the Dynasty 4 walls and floors of III 1 and 2 (see plan).

In northwest quarter fore court we have distinctly at least three series of small structures. I is about level with the surface of decay of Dynasty 4, Sub I is about 100 - 120 cm lower and Sub-sub I is practically on the Dynasty 4 floor of the fore court. It appears now as if Sub-sub I represents small rooms constructed in the fore-court in Dynasty 4 (thus being really of series III), while Sub I represents possibly the magazines of the Dynasty 6 temple (thus being really series II), while I are the later houses on the site but not later than Dynasty 7.

This final clearing has taken a long time; but has been extremely rich in scientific results (historical).

Photographic record of temple as cleared at present.
Gangs at work on sand on southern part of fore court. Laying railway to dump sand into western part of temple.