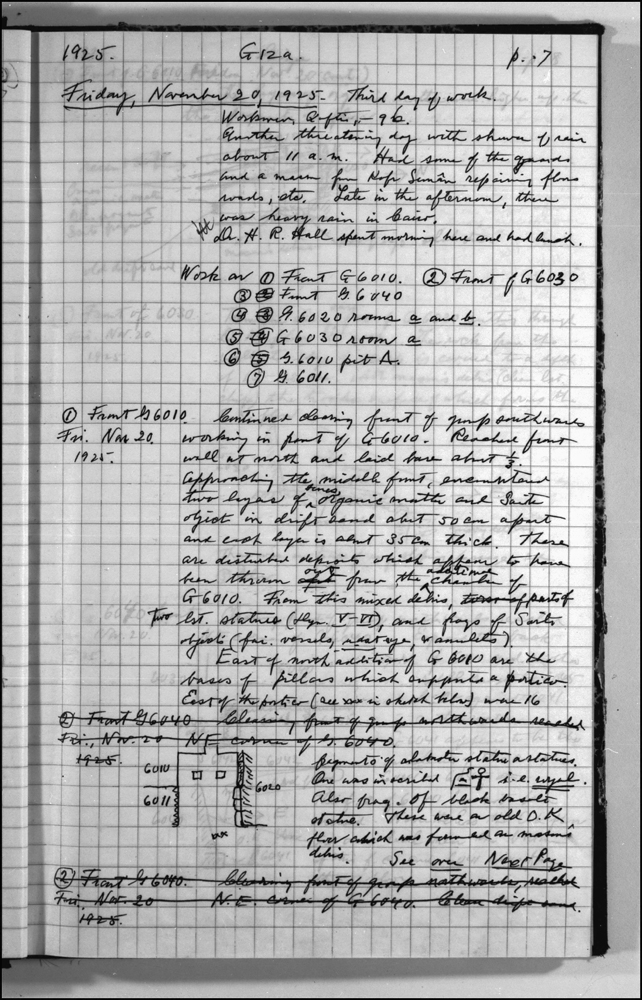 Another threatening day with shower of rain about 11 a.m. Had some of the guards and a mason from Kofr Seman repairing floors, roads, etc. Late in the afternoon, there was heavy rain in Cairo.
Dr. H.R. Hall spent morning here and had lunch.

(1) G 6010
Continued clearing front of group southwards working in front of G 6010. Reached front wall at north and laid bare about one-third. Approaching the middle front, encountered two layers of bones, organic matter and Saite objects in drift sand about 50 cm apart and each later is about 35 cm thick. These are disturbed deposits which appear to have been thrown out from the additional chamber of G 6010. From this mixed debris parts of two limestone statues (Dynasty 5-6) and fragments of Saite objects (faience vessels, udjat eye, and amulets).
East of north addition of G 6010 are the bases of pillars which supported a portico. [ILLUSTRATION] East of the portico (see xxx in sketch below) were sixteen fragments of alabaster statue or statues. One was inscribed [GLYPHS] i.e. royal. Also fragments of black basalt statue. These were in old Old Kingdom floor which was formed on mason's debris.