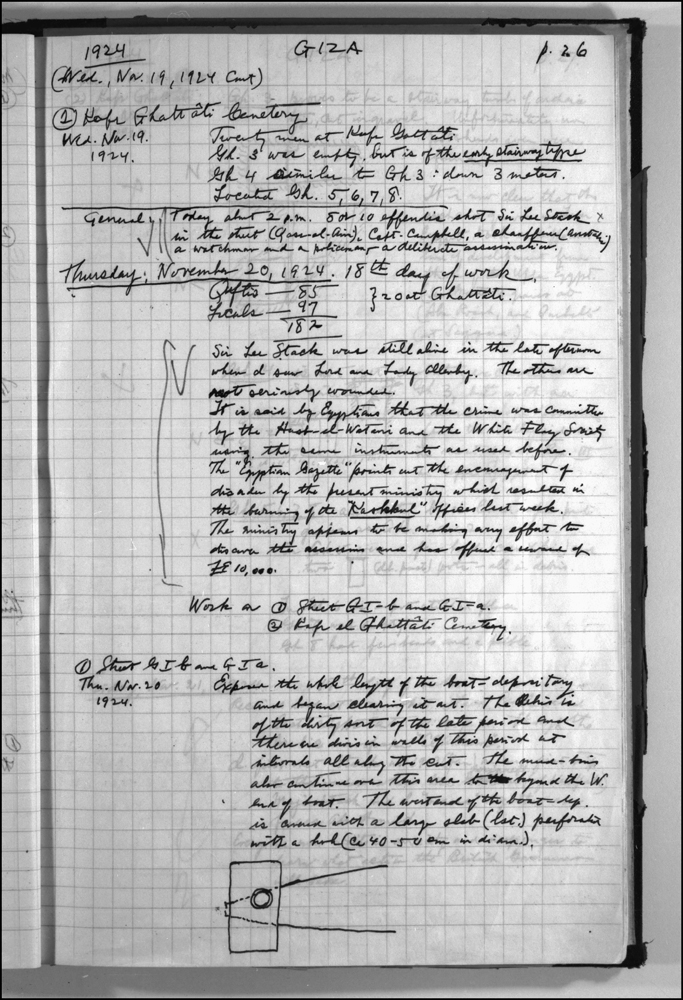 General: Today about 2 p.m., [in the Qasr el-Aini Street] eight or ten effendis shot Sir Lee Stack, Capt. Campbell, a chauffeur (an Australian), a watchman and a policemen, a deliberate assassination.

Sir Lee Stack was still alive in the late afternoon when I saw Lord and Lady Allenby [at the excavations]. The others are not seriously wounded.
It is said by Egyptians that the crime was committed by the Hasb-el-Watani and the White Flag Society using the same instruments as [in former matters]. The "Egyptian Gazette" points out the encouragement of disorder by the present ministry which resulted in the burning of the "Kashkul" offices last week. The ministry appears to be making every effort to discover the assassins and has offered a reward of LE 10,000 (Egyptian pounds).

(1) Avenue G 1
Street G I-b and G I-a. Exposed the whole length of the boat-depository [G I-a boat pit] and began clearing it out. The debris is of the dirty sort of the late period and there are division walls of this period at intervals all along the cut. The mud-bins also continue over this area to beyond the west end of boat. The west end of the boat-depression is covered with a large slab (limestone) perforated with a hole (about 40-50 cm in diameter) [ILLUSTRATION].