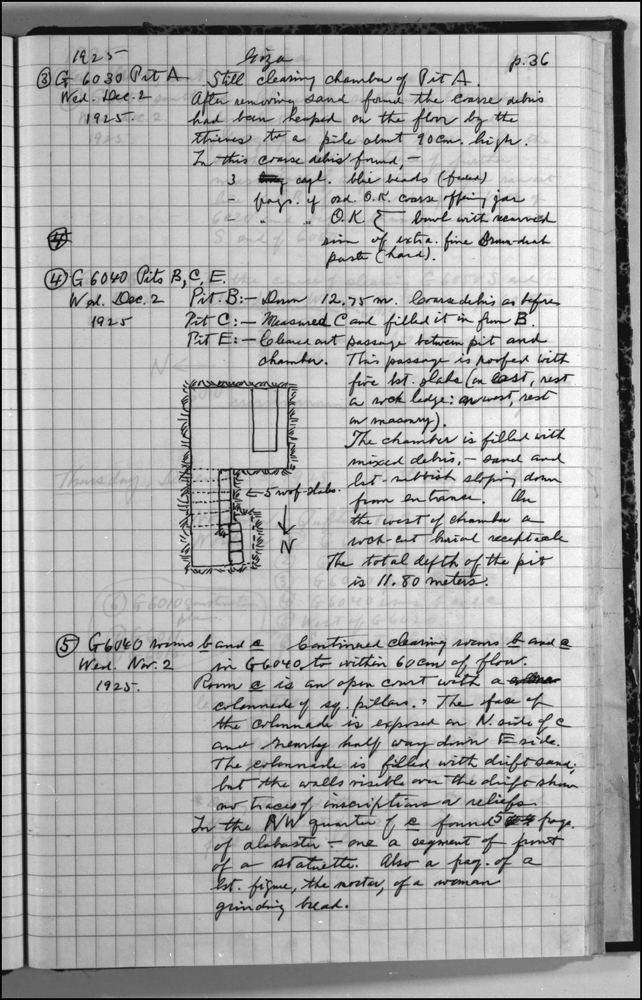 (3) G 6030
G 6030 A: Still clearing chamber of pit A. After removing sand found the coarse debris had been heaped on the floor by the thieves to a pile about 90 cm high. In this coarse debris found:
three cylinder blue beads (faded)
fragments of ordinary Old Kingdom coarse offering jar
fragments of Old Kingdom [ILLUSTRATION] bowl with recurved rim of extra fine brown drab paste (hard).

The chamber is filled with mixed debris, sand and limestone rubbish sloping down from entrance. On the west of chamber a rock cut burial receptacle.
The total depth of the pit is 11.8 meters.

(5) G 6040
G 6040 rooms b and c: Continued clearing rooms b and c in G 6040 to within 60 cm of floor.
Room c is an open court with a colonnade of square pillars. The face of the colonnade is exposed on north side of c and nearly half way down east side. The colonnade is filled with drift sand; but the walls visible over the drift show no traces of inscriptions or reliefs.
In the northwest quarter of c found five fragments of alabaster, one a segment of front of a statuette. Also a fragment of a limestone figure, the mortar, of a woman grinding bread.