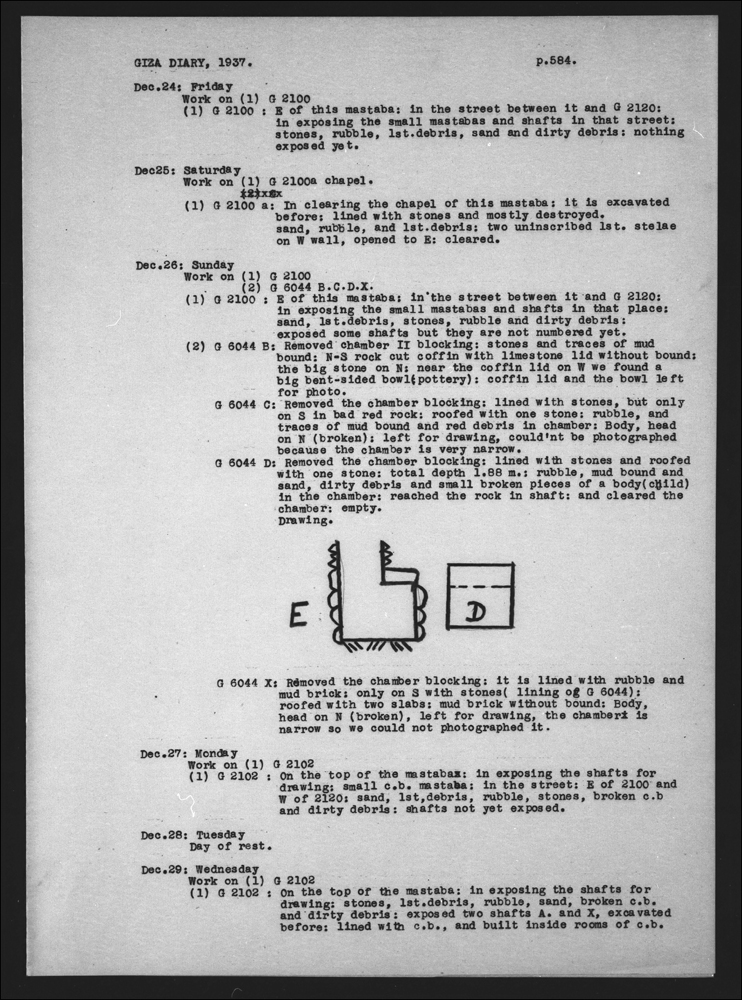 (1) East of G 2100
East of this mastaba. In the street between it and G 2120. In exposing the small mastabas and shafts in that street. Stones, rubble, limestone debris, sand and dirty debris. Nothing exposed yet.

(1) G 2100 a
In clearing the chapel of this mastaba. It is excavated before. Lined with stones and mostly destroyed. Sand, rubble, and limestone debris. Two uninscribed limestone stelae on west wall, opened to east. Cleared.

(1) East of G 2100
East of this mastaba. In the street between it and G 2120. In exposing the small mastabas and shafts in that place. Sand, limestone debris, stones, rubble and dirty debris. Exposed some shafts but they are not numbered yet.

(2) G 6044
G 6044 B: Removed chamber II blocking. Stones and traces of mud bound. North-south rock-cut coffin with limestone lid without bound. The big stone on north. Near the coffin lid on west we found a big bent-sided bowl (pottery). Coffin lid and the bowl left for photo.

G 6044 C: Removed the chamber blocking. Lined with stones, but only on south in bad red rock. Roofed with one stone. Rubble, and traces of mud bound and red debris in chamber. Body, head on north (broken). Left for drawing, couldn't be photographed because the chamber is very narrow.

G 6044 D: Removed the chamber blocking. Lined with stones and roofed with one stone. Total depth 1.88 meters. Rubble, mud bound and sand, dirty debris and small broken pieces of a body (child) in the chamber. Reached the rock in shaft, and cleared the chamber. Empty. Drawing.

G 6044 X: Removed the chamber blocking. It is lined with rubble and mud-brick. Only on south with stones (lining of G 6044). Roofed with two slabs. Mud-brick without bound. Body, head on north (broken), left for drawing. The chamber is narrow so we could not photographed it.

(1) G 2102
On the top of the mastaba. In exposing the shafts for drawing. Small crude brick mastaba. In the street. East of G 2100 and west of G 2120. Sand, limestone debris, rubble, stones, broken crude brick and dirty debris. Shafts not yet exposed.

(1) G 2102
On the top of the mastaba. In exposing the shafts for drawing. Stones, limestone debris, rubble, sand, broken crude brick and dirty debris. Exposed two shafts A and X, excavated before. Lined with crude brick, and built inside rooms of crude brick.