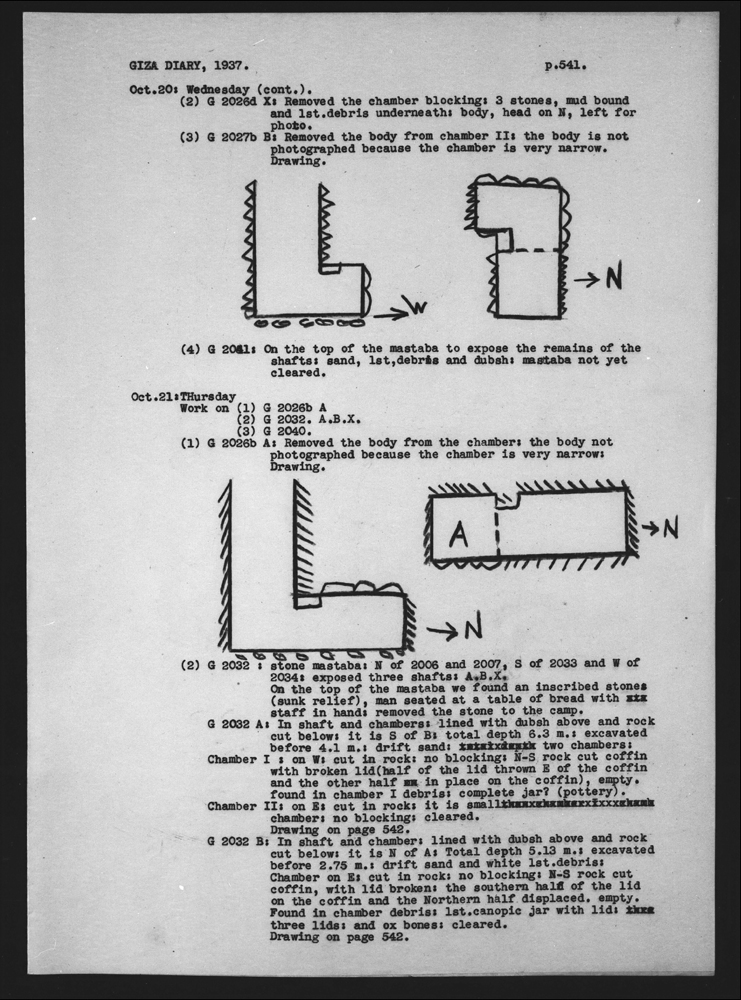 (3) G 2027b
G 2027b B: Removed the body from chamber II. The body is not photographed because the chamber is very narrow. Drawing.

(4) G 2041
On the top of the mastaba to expose the remains of the shafts. Sand, limestone debris and dubsh. Mastaba not yet cleared.

(1) G 2026b
G 2026b A: Removed the body from the chamber. The body not photographed because the chamber is very narrow. Drawing.

G 2032 A: In shaft and chambers. Lined with dubsh above and rock-cut below. It is south of B. Total depth 6.3 meters. Excavated before 4.1 meters. Drift sand. Two chambers.
Chamber I. On west. Cut in rock. No blocking. North-south rock-cut coffin with broken lid (half of the lid thrown east of the coffin and the other half in place on the coffin ), empty. Found in chamber I debris. Complete jar? (pottery).
Chamber II. On east. Cut in rock. It is small chamber. No blocking. Cleared. Drawing on page 542.

G 2032 B: In shaft and chamber. Lined with dubsh above and rock-cut below. It is north of A. Total depth 5.13 meters. Excavated before 2.75 meters. Drift sand and white limestone debris. Chamber on east. Cut in rock. No blocking. North-south rock-cut coffin, with lid broken. The southern half of the lid on the coffin and the northern half displaced. Empty. Found in chamber debris. Limestone canopic jar with lid, three lids, and ox bones. Cleared. Drawing on page 542.