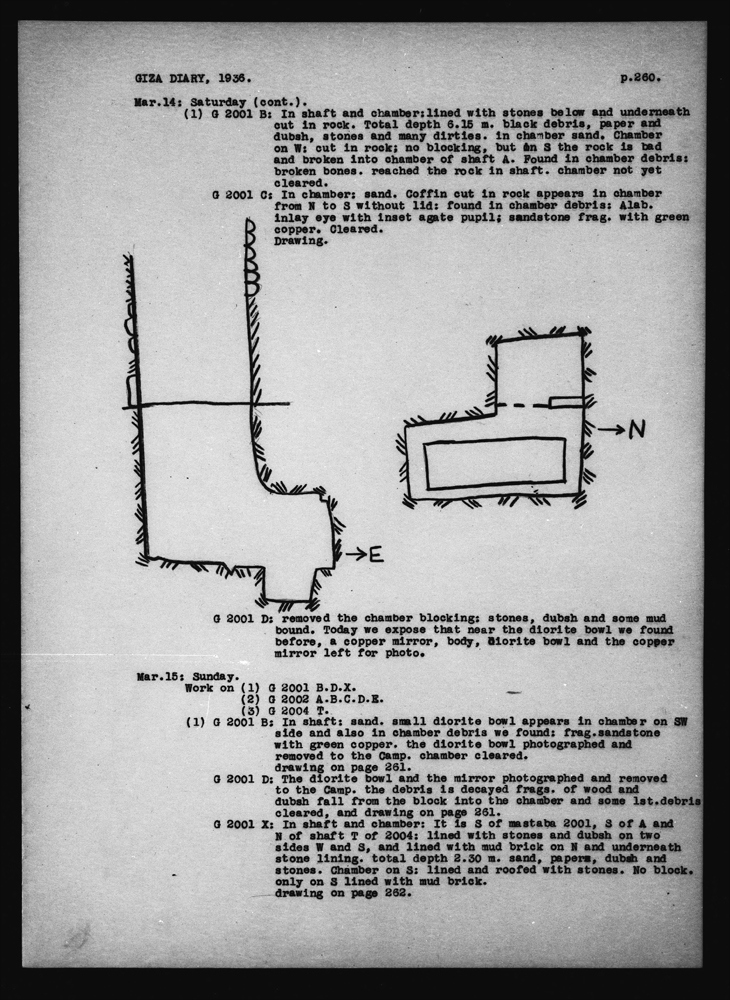 (1) G 2001 (continued)
G 2001 B: In shaft and chamber. Lined with stones below and underneath cut in rock. Total depth 6.15 meters. Black debris, paper and dubsh, stones and many dirties. In chamber sand. Chamber on west, cut in rock, no blocking, but on south the rock is bad and broken into chamber of shaft A. Found in chamber debris: broken bones. Reached the rock in shaft. Chamber not yet cleared.

(1) G 2001
G 2001 B: In shaft. Sand. Small diorite bowl appears in chamber on southwest side and also in chamber debris we found - fragment sandstone with green copper. The diorite bowl photographed and removed to the camp. Chamber cleared. Drawing on page 261.

G 2001 D: The diorite bowl and the mirror photographed and removed to the camp. The debris is decayed fragments of wood and dubsh fall[en] from the block into the chamber and some limestone debris. Cleared. Drawing on page 261

G 2001 X: In shaft and chamber. It is south of mastaba G 2001, south of A and north of shaft T of G 2004. Lined with stones and dubsh on two sides west and south, and lined with mud brick on north and underneath stone lining. Total depth 2.3 meters. Sand, paper, dubsh and stones. Chamber on south. Lined and roofed with stones. No block. Only on south lined with mud brick. Drawing on page 262.