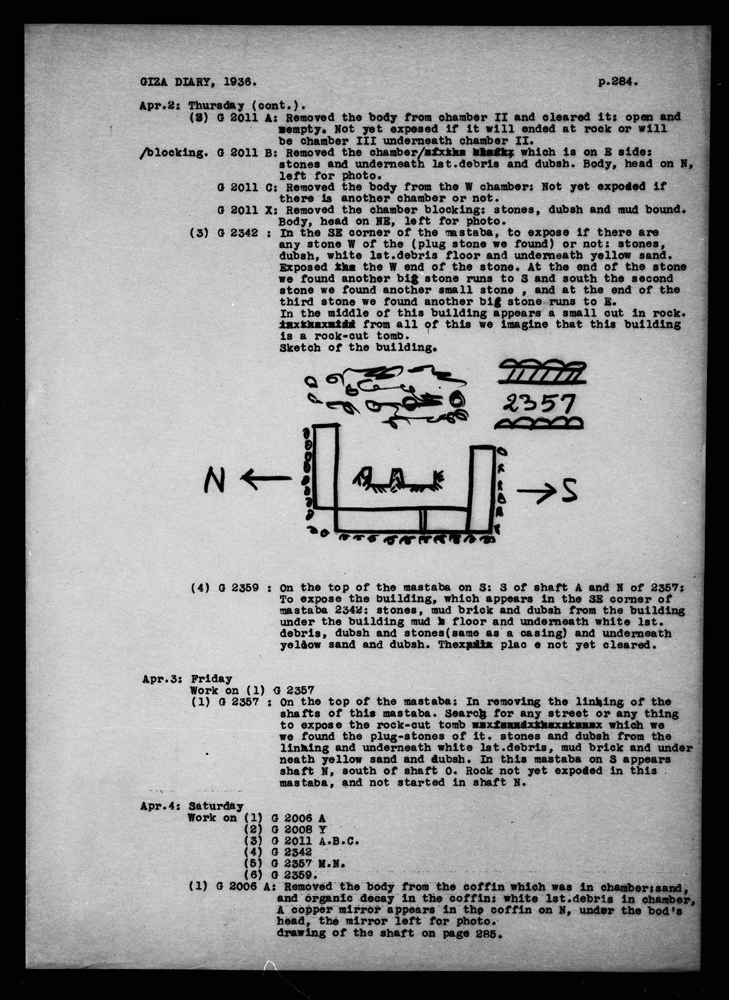 (2) G 2011
G 2011 A: Removed the body from chamber II and cleared it, open and empty. Not yet exposed if it will end at rock or will be chamber III underneath chamber II.

G 2011 B: Removed the chamber blocking which is on east side. Stones and underneath limestone debris and dubsh. Body, head on north. Left for photo.

G 2011 C: Removed the body from the west chamber. Not yet exposed if there is another chamber or not.

(4) G 2359 [= G 5552]
On top of the mastaba on south, south of shaft A and north of G 2357. To expose the building, which appears in the southeast corner of mastaba G 2342. Stones, mud brick and dubsh from the building; under the building mud floor and underneath white limestone debris, dubsh and stones (same as a casing) and underneath yellow sand and dubsh. The place not yet cleared.

(1) G 2357
On top of the mastaba. In removing the lining of the shafts of this mastaba. Search for any street or any thing to expose the rock cut tomb which we found the plug stones of it. Stones and dubsh from the lining and underneath white limestone debris, mud brick and underneath yellow sand and dubsh. In this mastaba on south appears shaft north, south of shaft O [= G 5561 O]. Rock not yet exposed in this mastaba, and not started in shaft N.

(1) G 2006
G 2006 A: Removed the body from the coffin which was in chamber. Sand, and organic decay in the coffin. White limestone debris in chamber. A copper mirror [36-4-31] appears in the coffin on north, under the body's head, the mirror left for photo. Drawing of the shaft on page 285.