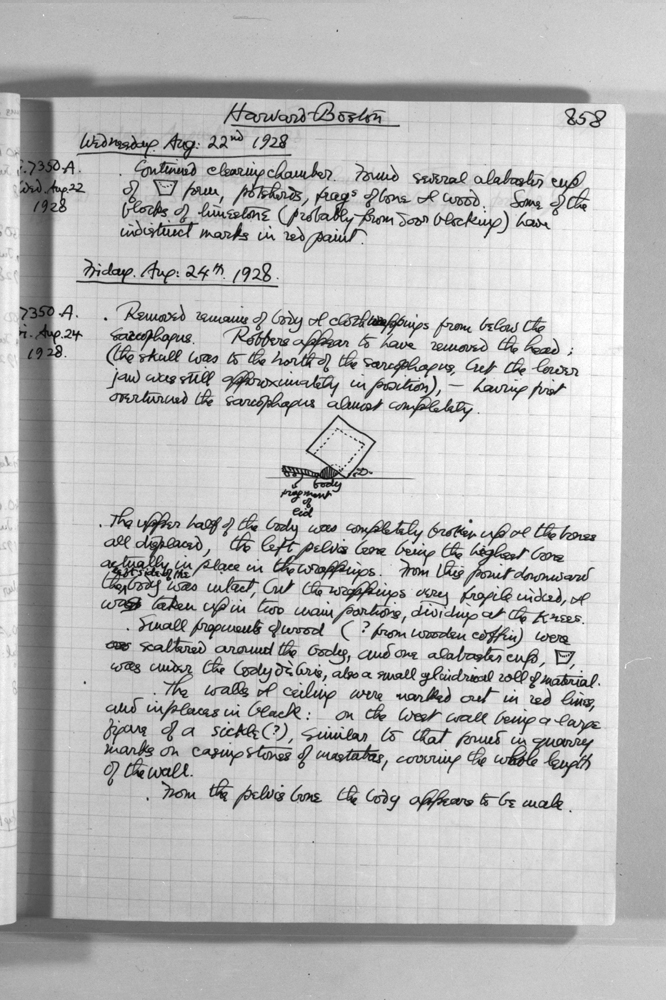 G 7350
G 7350 A: Continued clearing chamber. Found several alabaster cups of [ILLUSTRATION] form, potsherds, fragments of bone and wood. Some of the blocks of limestone (probably from door blocking) have indistinct marks in red paint.

G 7350
G 7350 A: Removed remains of body and cloth wrappings from below the sarcophagus. Robbers appear to have removed the head (the skull was to the north of the sarcophagus, but the lower jar was still approximately in position), - having first overturned the sarcophagus almost completely.

The upper half of the body was completely broken up and the bones all displaced, the left pelvis bone being the highest bone actually in place in the wrappings. From this point downward the left side of the body was intact, but the wrappings very fragile indeed, and was taken up in two main portions, dividing at the knees.
Small fragments of wood (? from wooden coffin) were scattered around the body, and one alabaster cup, [ILLUSTRATION] was under the body debris, also a small cylindrical roll of material.
The walls and ceiling were marked out in red lines and in places in black: on the west wall being a large figure of a sickle (?), similar to that formed in quarry marks on casing stones of mastabas, covering the whole length of the wall.
From the pelvis bone the body appears to be male.