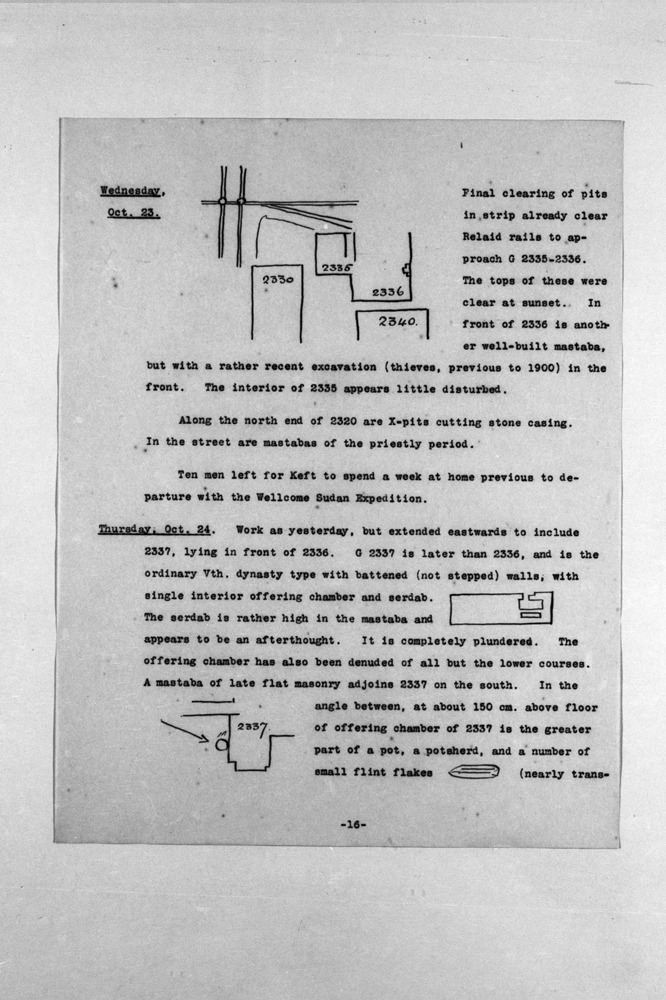 [ILLUSTRATION]
Final clearing of pits in strip already clear. Relaid rails to approach G 2335 - G 2336. The tops of these were clear at sunset.

In front of G 2336 is another well-built mastaba, but with a rather recent excavation (thieves, previous to 1900) in the front. The interior of G 2335 appears a little disturbed.

Along the north end of G 2320 [= G 5280] are X-pits cutting stone casing. In the street are mastabas of the priestly period.

Ten men left for Quft to spend a week at home previous to departure with the Wellcome Sudan Expedition.

Work as yesterday, but extended eastwards to include G 2337, lying in front of G 2336. G 2337 is later than G 2336, and is the ordinary Dynasty 5 type with battened (not stepped) walls, with single interior offering chamber and serdab. [ILLUSTRATION]
The serdab is rather high in the mastaba and appears to be an afterthought. It is completely plundered. The offering chamber has also been denuded of all but the lower courses.
A mastaba of late flat masonry adjoins G 2337 on the south.
[ILLUSTRATION]
In the angle between, at about 150 cm above floor of offering chamber of G 2337 is the greater part of a pot, potsherd, and a number of small flint flakes [ILLUSTRATION] [12-10-24] (nearly trans-