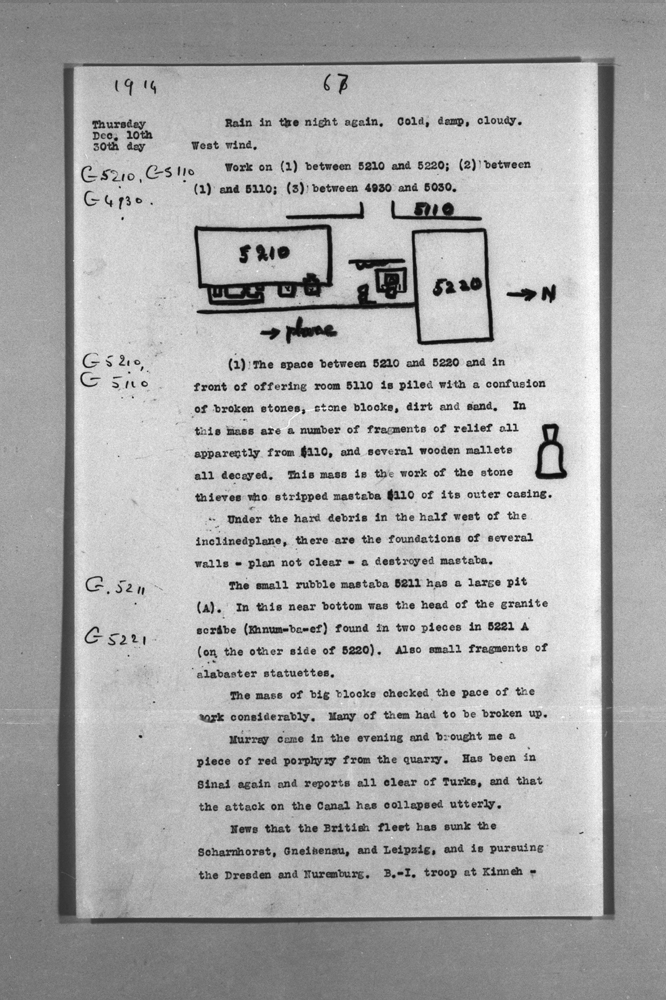 (1) Between G 5210 and G 5220
The space between G 5210 and G 5220 and in front of offering room G 5110 is piled with a confusion of broken stones, stone blocks, dirt and sand. In this mass area number of fragments of relief all apparently from G 5110, and several wooden mallets [ILLUSTRATION] all decayed. This mass is work of the stone thieves who stripped mastaba G 5110 of its outer casing.
Under the hard debris in the half west of the inclined plane, there are the foundations of several walls - plan not clear - a destroyed mastaba.

G 5211, G 5221
The small rubble mastaba G 5211 has a large pit (A). In this near bottom was the head of the granite scribe (Khnum-ba-ef) found in two pieces in G 5221 A (on the other side of G 5220). Also small fragments of alabaster statuettes.
The mass of big blocks checked the pace of the work considerably. Many of them had to be broken up.

Murray came in the evening and brought me a piece of red porphyry from the quarry. Has been in Sinai again and reports all clear of Turks, and that the attack on the Canal has collapsed utterly.
News that the British fleet has sunk the Scharnhorst, Gneisenau, and Leipzig, and is pursuing the Dresden and Nuremburg. British - Indian troop at Kinneh -