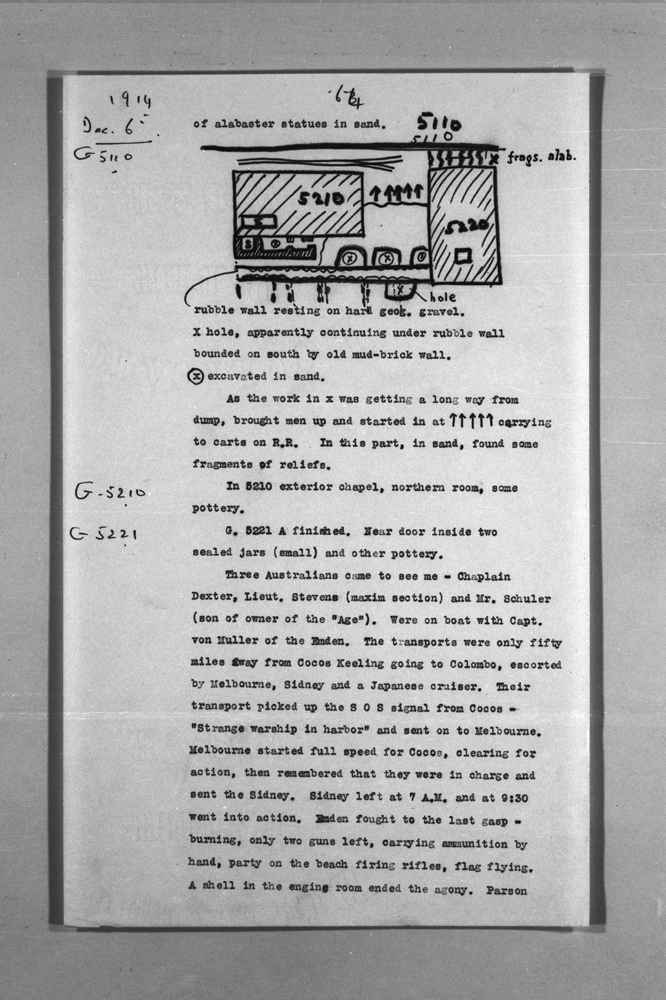 Rubble wall resting on hard geological gravel. X hole, apparently continuing under rubble wall bounded on south by old mud brick wall. (X) [circled] excavated in sand.
As the work in x was getting a long way from dump, brought men up and started in at [ARROWS] carrying to carts on railroad. In this part, in sand, found some fragments of reliefs.

Three Australians came to see me - Chaplain Dexter, Lieutenant Stevens (maxim section) and Mr. Schuler (son of the owner of the "Age"). Were on boat with Captain von Muller of the Emden. The transports were only 50 miles away from Cocos Keeling going to Columbo, escorted by Melbourne, Sidney and a Japanese cruiser. Their transport picked up the S.O.S. signal from Cocos - "Strange warship in harbor" and sent on to Melbourne. Melbourne started full speed for Cocos, clearing for action, then remembered that they were in charge and sent the Sidney. Sidney left at 7 a.m. and at 9:30 went into action. Emden fought to the last gasp - burning, only two guns left, carrying ammunition by hand, party on the beach firing rifles, flag flying. A shell in the engine room ended the agony. Parson