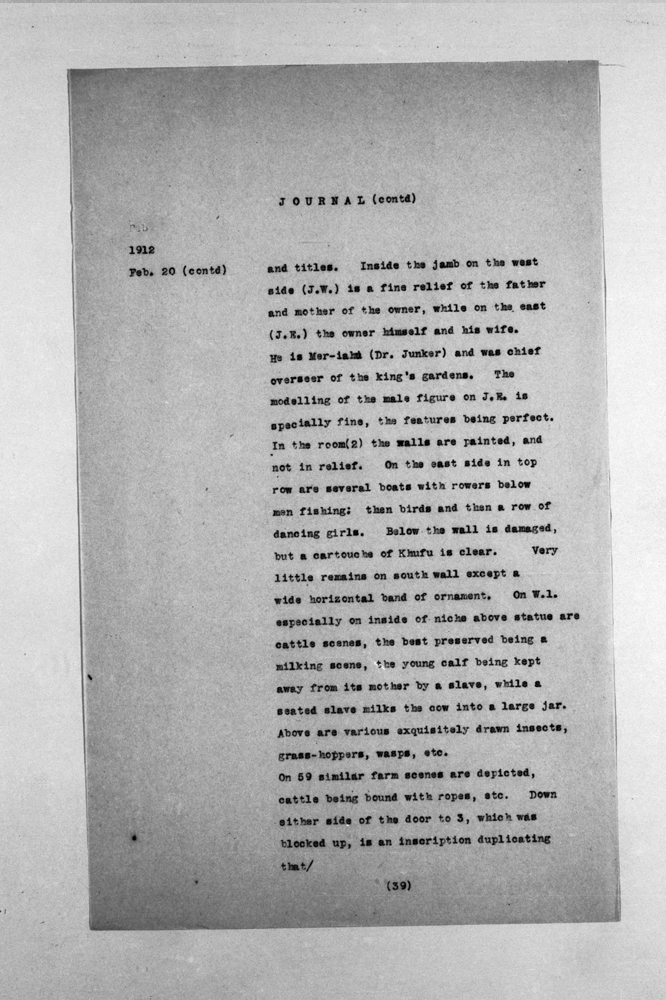 [G 2184 (continued)]
titles. Inside the jamb on the west side (J.W.) is a fine relief of the father [Kanefer] and mother [Nuut] of the owner [Akhmerutnisut], while on the east (J.E.) the owner himself and his wife [Nefretsedjemet]. He is Mer-iahu (Dr. Junker) and was chief overseer of the king's gardens. The modeling of the male figure on J.E. is especially fine, the features being perfect. In the room (2) the walls are painted, and not in relief. On the east side in top row are several boats with rowers below men fishing; then birds and then a row of dancing girls. Below the wall is damaged, but a cartouche of Khufu is clear. Very little remains on south wall except a wide horizontal band of ornament. On W.1. especially on inside of niche above statue are cattle scenes, the best preserved being a milking scene, the young calf being kept away from its mother by a slave, while a seated slave milks the cow into a large jar. Above are various exquisitely drawn insects, grasshoppers, wasps, etc.
On 59 similar farm scenes are depicted, cattle being bound with ropes, etc. Down either side of the door to 3, which was blocked up, is an inscription duplicating that