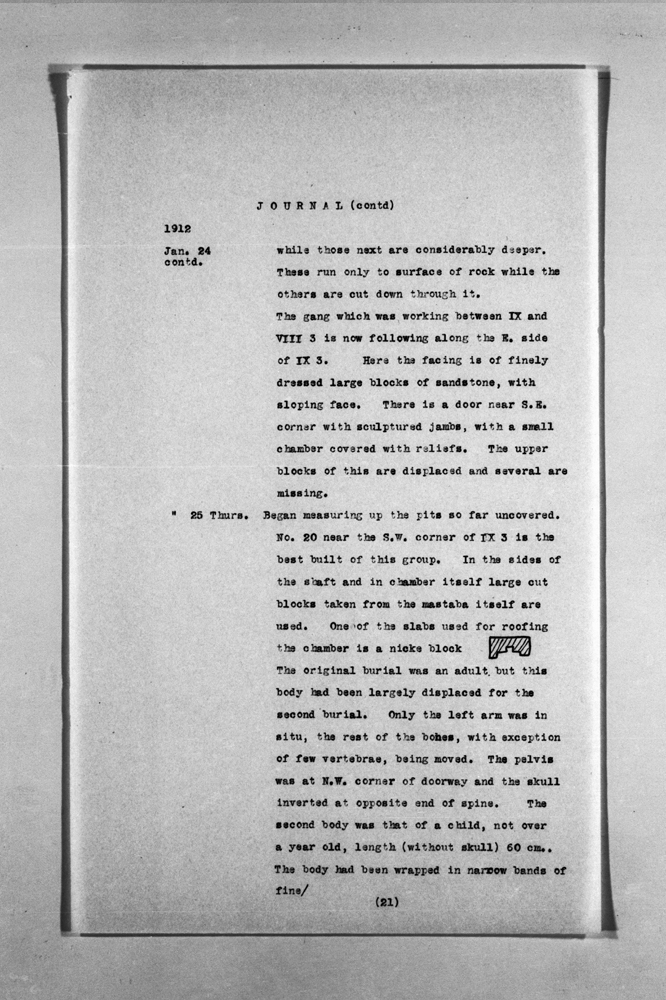 while those next are considerably deeper. They run only to surface of rock while the others are cut down through it.
The gang which was working between IX [3 = G 2150] and VIII 3 [= G 2140] is now following along the east side of IX 3 [= G 2150]. Here the facing is of finely dressed large block of sandstone [nummulitic limestone], with sloping face. There is a door near southeast corner with sculptured jambs, with a small chamber covered with reliefs. The upper blocks of this are displaced and several are missing.

Began measuring up the pits so far uncovered.
No. 20 [= G 2143 X] near the southwest corner of IX 3 [= G 2150] is the best built of this group. In the side of the shaft and in chamber itself large cut blocks taken from the mastaba itself are used. One of the slabs used for roofing the chamber is a niche block [ILLUSTRATION]. The original burial was an adult but this body had been largely displaced for the second burial. Only the left arm was in situ, the rest of the bones, with exception of few vertebrae, being moved. The pelvis was at northwest corner of doorway and the skull inverted at opposite ends of spine. The second body was that of a child, not over a year old, length (without skull) 60 cm. The body had been wrapped in narrow bands of fine