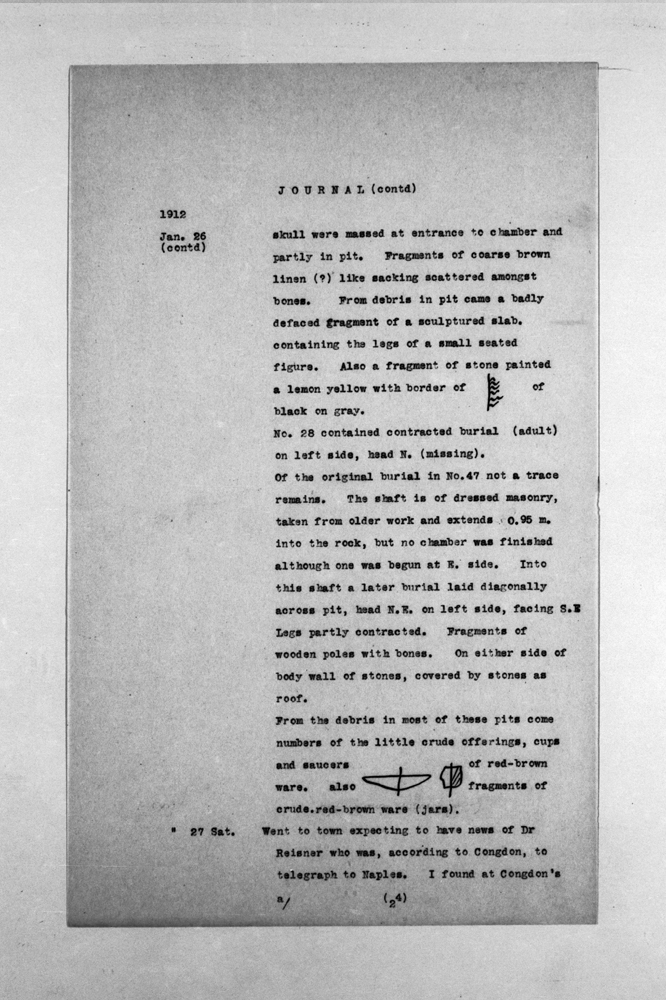 [No. 24 = G 2143 C (continued)]
were massed at entrance to chamber and partly in pit. Fragments of coarse brown linen (?) like sacking scattered amongst bones. From debris in pit came a badly defaced fragment of a sculptured slab, containing the legs of a small seated figure. Also a fragment of stone painted a lemon yellow with border of [ILLUSTRATION] black on gray.

Of the original burial in No. 47 [sic!, No. 46 = G 2165 F] not a trace remains. The shaft is of dressed masonry, taken from older work and extends .95 meters into the rock, but no chamber was finished although one was begun at east side. Into this shaft a later burial laid diagonally across pit, head northeast on left side, facing southeast. Legs partly contracted. Fragments of wooden poles with bones. On either side of body wall of stones, covered by stones as roof.

From the debris in most of these pits come numbers of the little crude offerings, cups and saucers [ILLUSTRATION] of red brown ware, also fragments of crude red brown ware (jars).

Went to town expecting to have news of Dr. Reisner who was, according to Congdon, to telegraph to Naples. I found at Congdon's a