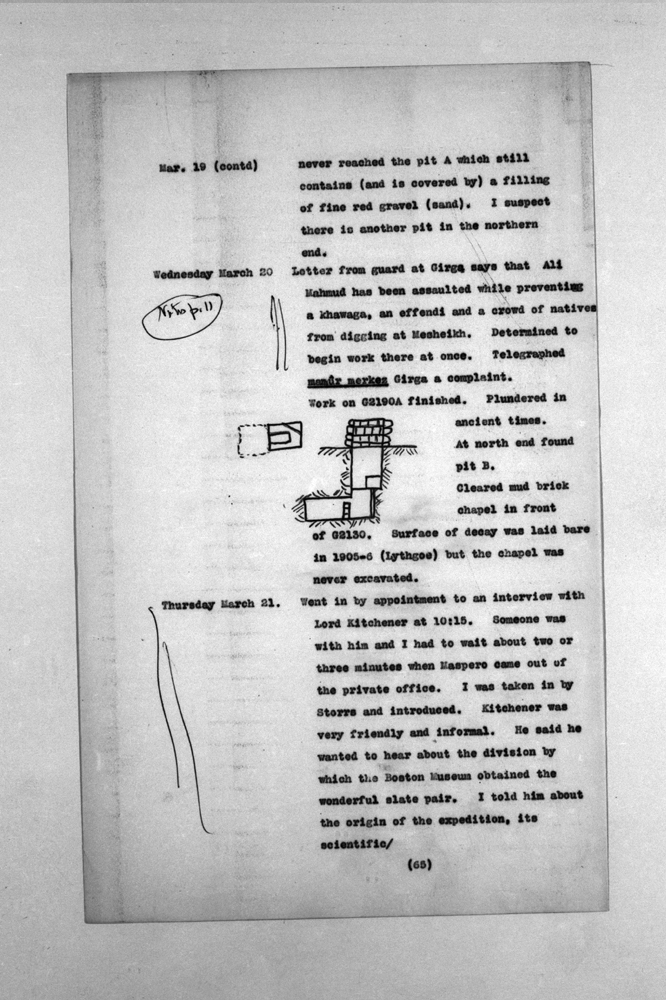 [G 2190 (continued)]
reached the pit A which still contains (and is covered by) a filling of fine red gravel (sand). I suspect there is another pit in the northern end.

Letter from guard at Girga says that Ali Mahmud has been assaulted with preventing a khawaga, an effendi and a crowd of natives from digging at Mesheikh. Determined to begin work there at once. Telegraphed mamur merkez Girga complaint.

Work on G 2190 A finished.
[ILLUSTRATION]
Plundered in ancient times. At north end found pit B.

Cleared mud brick chapel in front of G 2130. Surface of decay was laid bare in 1905-6 (Lythgoe) but the chapel was never excavated.

Went in by appointment to an interview with Lord Kitchener at 10:15. Someone was with him and I had to wait about two or three minutes when Maspero came out of the private office. I was taken in by Storrs and introduced. Kitchener was very friendly and informal. He said he wanted to hear about the division by which the Boston Museum obtained the wonderful slate pair [Menkaure greywacke pair statue = published no. 17 = 10-1-16 = MFA 11.1738]. I told him about the origin of the expedition, its scientific