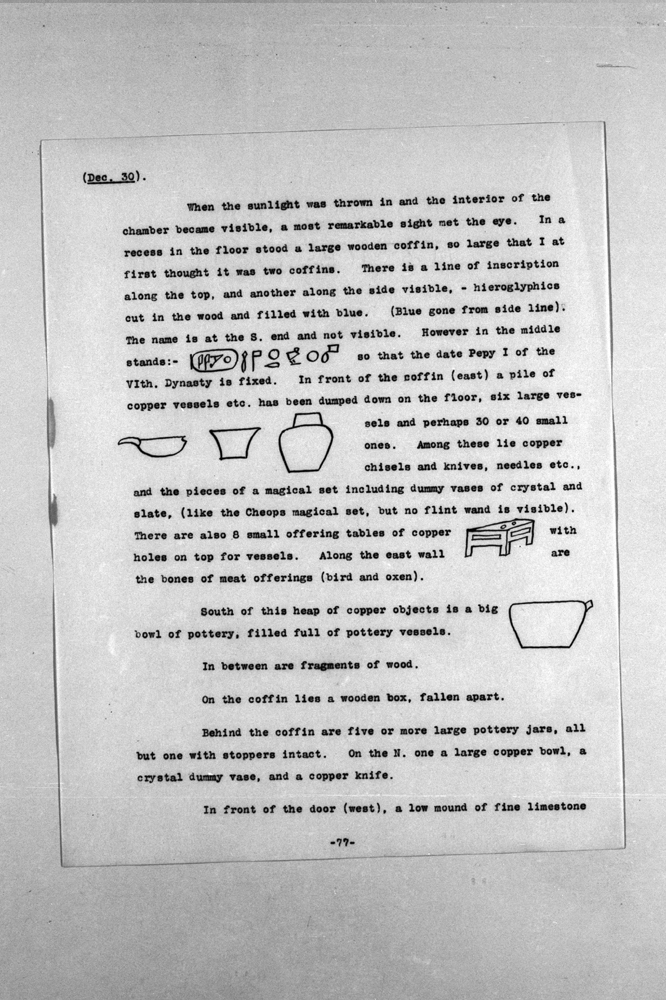 [G 2381 A, continued]
When the sunlight was thrown in and the interior of the chamber became visible, a most remarkable sight met my eye. In a recess in the floor stood a large wooden coffin, so large that I at first thought it was two coffins. There is a line of inscription along the top, and another along the side visible, hieroglyphics cut in the wood and filled with blue. (Blue gone from side line). The name is at the south end and not visible. However in the middle stands: [GLYPHS] so that the date Pepy I of Dynasty 6 is fixed. In front of the coffin (east) a pile of copper vessels, etc. has been dumped down on the floor, six large vessels [ILLUSTRATION] and perhaps thirty or forty small ones. Among these lie copper chisels and knives, needles, etc., and the pieces of a magical set including dummy vases of crystal and slate, (like the Khufu magical set, but no flint wand is visible). There are also eight small offering tables of copper [ILLUSTRATION] with holes on top for vessels. Along the east wall are the bones of meat offerings (bird and oxen).
South of this heap of copper objects is [ILLUSTRATION] a big bowl of pottery, filled full of pottery vessels.
In between are fragments of wood.
On the coffin lies a wooden box, fallen apart.
Behind the coffin are five or more large pottery jars, all but one with stoppers intact. On the north one a large copper bowl, a crystal dummy vase, and a copper knife.
In front of the door (west), a low mound of fine limestone