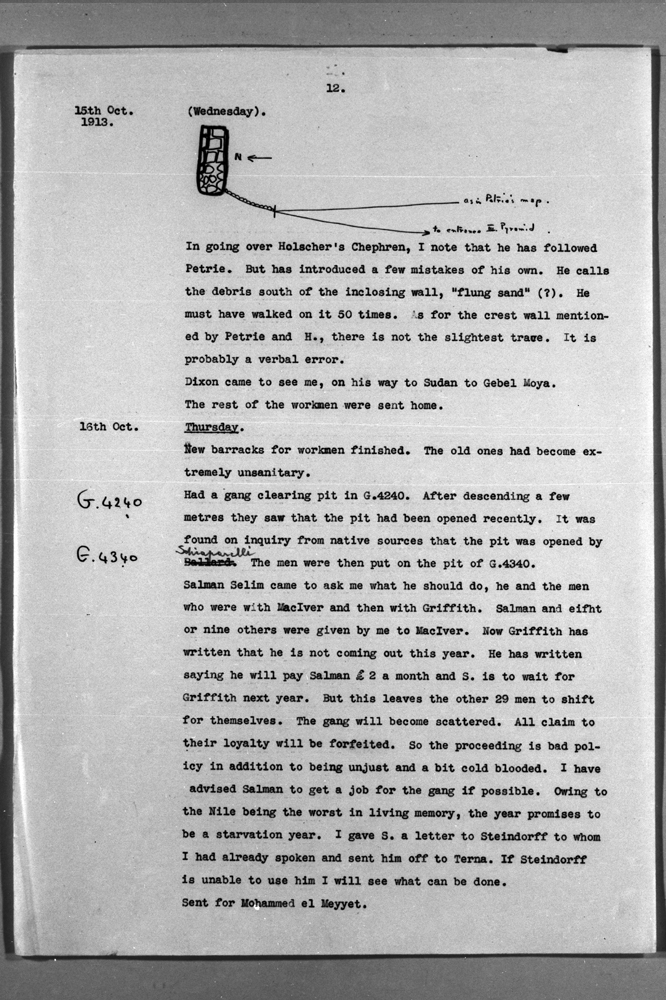 In going over Holscher's Khafre, I note that he has followed Petrie. But has introduced a few mistakes of his own. He calls the debris south of the inclosing wall, "flung sand" (?). He must have walked on it fifty times. As for the crest wall mentioned by Petrie and Holscher, there is not the slightest trace. It is probably a verbal error.

Dixon came to see me, on his way to Sudan to Gebel Moya.

The rest of the workmen were sent home.

New barracks for workmen finished. The old ones had become extremely unsanitary.

Had a gang clearing pit in G 4240. After descending a few meters they saw that the pit had been opened recently. It was found on inquiry from native sources that the pit was opened by Schiaparelli. The men were then put on the pit of G 4340.

Salman Selim came to ask me what he should do, he and the men who were with MacIver and then with Griffith. Salman and eight or nine others were given by me to MacIver. Now Griffith has written that he is not coming out this year. He has written saying he will pay Salman L 2 a month and Salman is to wait for Griffith next year. But this leaves the other twenty-nine men to shift for themselves. The gang will become scattered. All claim their loyalty will be forfeited. So the proceeding is bad policy in addition to being unjust and a bit cold-blooded. I have advised Salman to get a job for the gang if possible. Owing to the Nile being the worst in living memory, the year promises to be a starvation year. I gave Salman a letter to Steindorff to whom I had already spoken and sent him off to Terna. If Steindorff is unable to use him I will see what can be done.