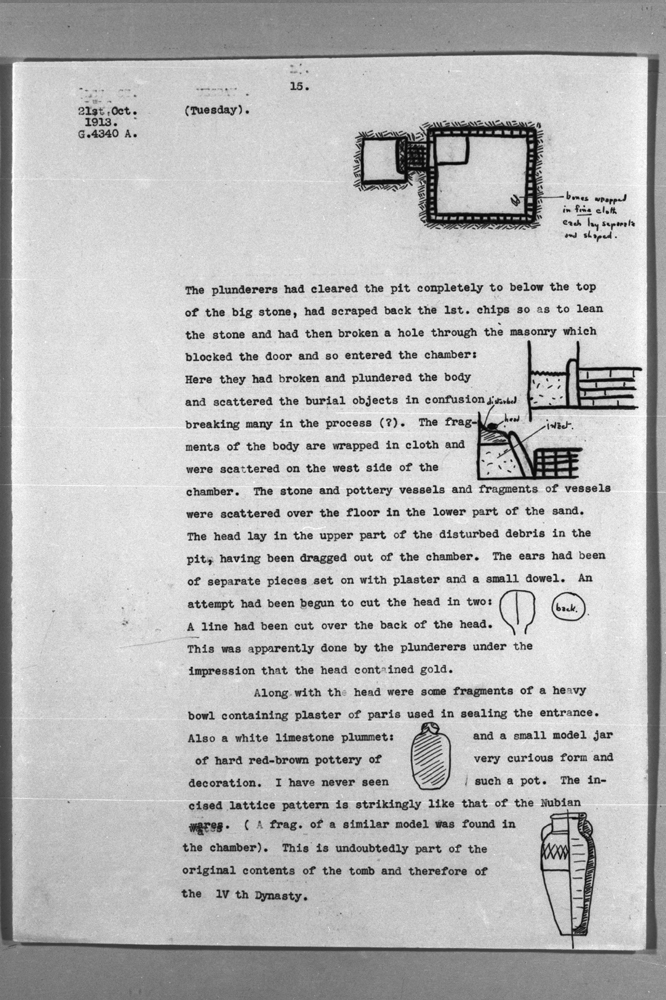 The plunderers had cleared the pit completely to below the top of the big stone, had scraped back the limestone chips so as to lean the stone and had then broken a hole through the masonry which blocked the door and so entered the chamber: [ILLUSTRATION]. Here they had broken and plundered the body and scattered the burial objects in confusion breaking many in the process (?). The fragments of the body are wrapped in cloth and were scattered on the west side of the chamber. The stone and pottery vessels and fragments of vessels were scattered over the floor in the lower part of the sand. The head lay in the upper part of the disturbed debris in the pit, having been dragged out of the chamber. The ears had been of separate pieces set on with plaster and a small dowel. An attempt had been begun to cut the head in two [ILLUSTRATION]. A line had been cut over the back of the head. This was apparently done by the plunderers under the impression that the head contained gold.
Along with the head were some fragments of a heavy bowl containing plaster of paris used in sealing the entrance. Also a white limestone plummet: [ILLUSTRATION] (height about 10 cm) and a small model jar of hard red-brown pottery of very curious form and decoration [ILLUSTRATION] (scale 1:2). I have never seen such a pot. The incised lattice pattern is strikingly like that of the Nubian wares. (A fragment of similar model was found in the chamber.) This is undoubtedly part of the original contents of the tomb and therefore of Dynasty 4.