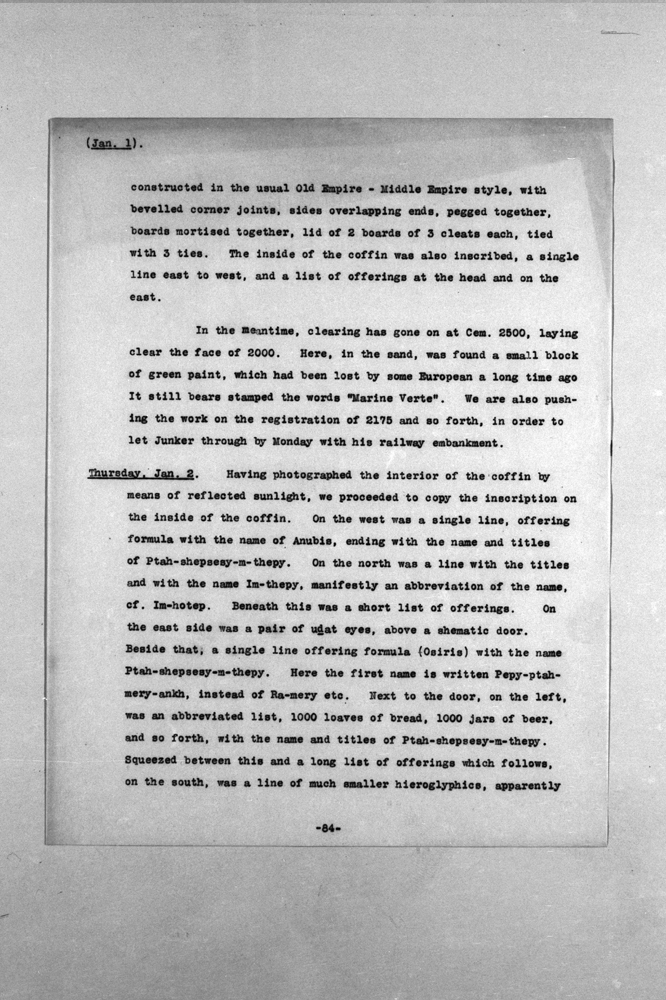 [G 2381 A, continued]
constructed in the usual Old Kingdom - Middle Kingdom style, with beveled corner joints, sides overlapping ends, pegged together, boards mortised together, lid of two boards of three cleats each, tied with three ties. The inside of the coffin was also inscribed, a single line east to west, and a list of offerings at the head and on the east.

In the meantime, clearing has gone on at cemetery G 2500, laying clear the face of G 2000. Here, in the sand, was found a small block of green paint which had been lost by some European a long time ago. It still bears stamped the words "Marine Verte".

We are also pushing the work on the registration of G 2175 and so forth, in order to let Junker through by Monday with his railway embankment.

[G 2381 A]
Having photographed the interior of the coffin by means of reflected sunlight, we proceeded to copy the inscription of the inside of the coffin. On the west was a single line, offering formula with the name of Anubis, ending with the name and titles of Ptah-shepsesy-m-thepy [Ptahshepses Impy]. On the north was a line with the titles and with the name Im-thepy [Impy], manifestly an abbreviation of the name, cf. Imhotep. Beneath this was a short list of offerings. On the east side was a pair of udjat eyes, above a shematic door. Beside that, a single line offering formula (Osiris) with the name Ptah-shepsesy-m-thepy. Here the first name is written Pepy-ptah-mery-ankh [Merptahankh], instead of Ra-mery [Meryre] etc. Next to the door, on the left, was an abbreviated list, one thousand (1,000) loaves of bread, one thousand (1,000) jars of beer, and so forth, with the name and titles of Ptah-shepsesy-m-thepy [Ptahshepses Impy]. Squeezed between this and a long list of offerings which follows, on the south, was a line of much smaller hieroglyphics, apparently