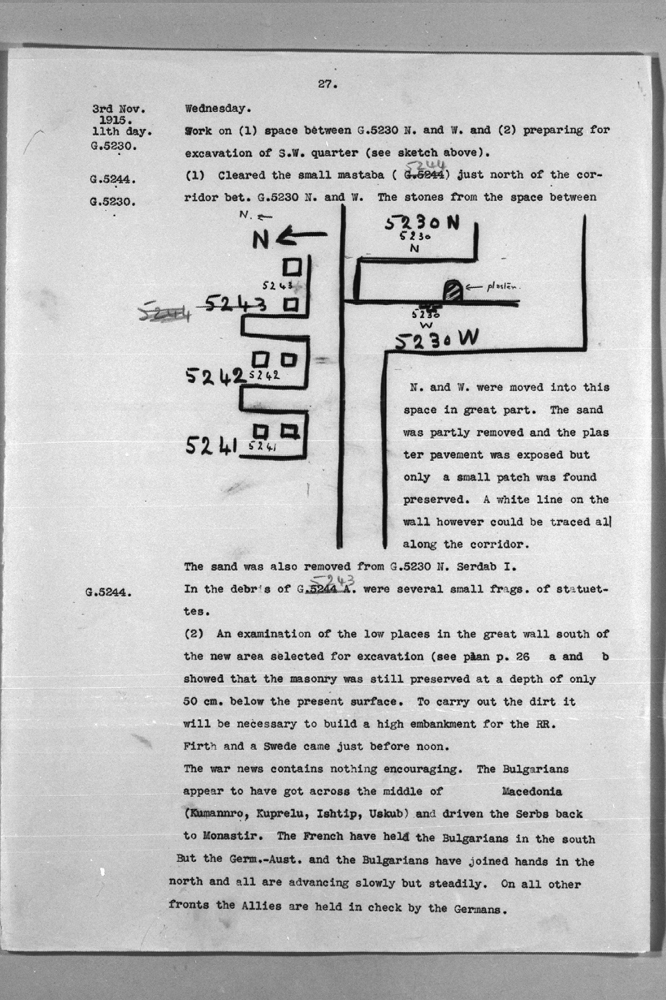 (1) Between G 5230 N and W, G 5244, G 5243
Cleared the small mastaba (G 5244) just north of the corridor between G 5230 N and W. [ILLUSTRATION] The stones from the space between N and W were moved into this space in great part. The sand was partly removed and the plaster pavement was exposed but only a small patch was found preserved. A white line on the wall however could be traced all along the corridor. The sand was also removed from G 5230 N, serdab I.
In the debris of G 5244 A [G 5243 ?] were several small fragments of statuettes.

(2) An examination of the low places in the great wall south of the new area selected for excavation (see plan page 26 [ARROW] a and [ARROW] b) showed that the masonry was still preserved at a depth of only 50 cm below the surface. To carry out the dirt it will be necessary to build a high embankment for the railroad.

Firth and a Swede came out just before noon.

The war news contains nothing encouraging. The Bulgarians appear to have got across the middle of [?]Herian[?] Macedonia (Kumannro, Keprelu, Ishtip, Uskub) and driven the Serbs back to Monastir. The French have held the Bulgarians in the south but the German-Austrians and the Bulgarians have joined hands in the north and all are advancing slowly but steadily. On all other fronts the Allies are held in check by the Germans.