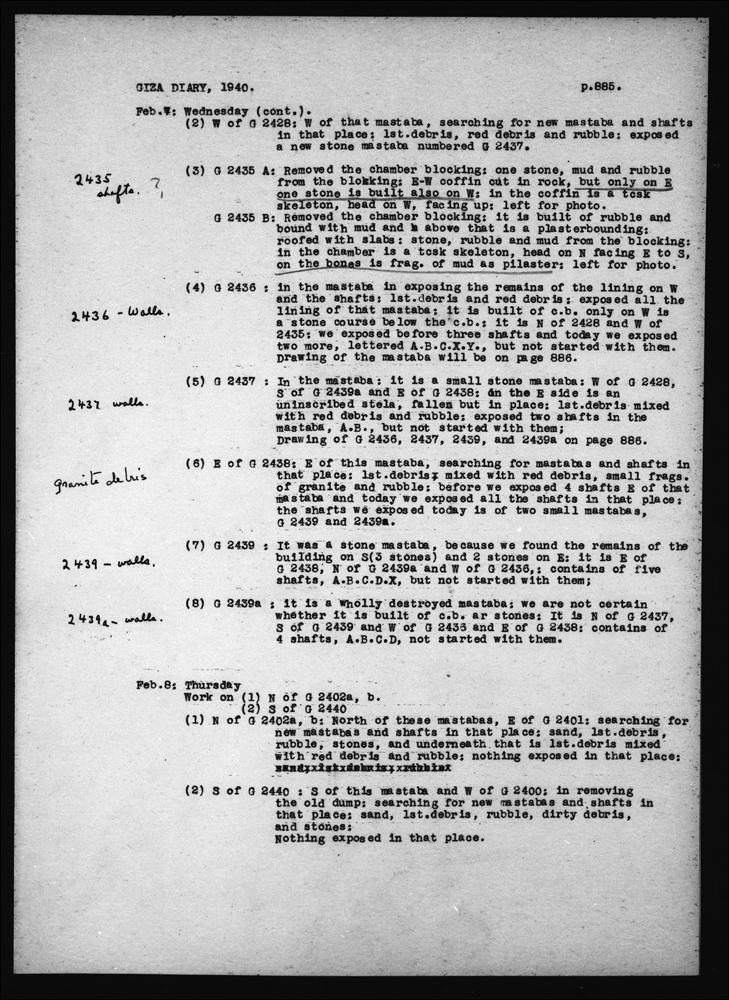 (2) West of G 2428
West of that mastaba, searching for new mastaba and shafts in that place. Limestone debris, red debris and rubble. Exposed a new stone mastaba numbered G 2437.

(3) G 2435
G 2435 A: Removed the chamber blocking. One stone, mud and rubble from the blocking. east-west coffin cut in rock, but only on east one stone is built also on west. In the coffin is a skeleton, head on west, facing up. Left for photo.

G 2435 B: Removed the chamber blocking. It is built of rubble and bound with mud and above that is a plaster bounding. Roofed with slabs. Stone, rubble and mud from the blocking. In the chamber is a skeleton, head on north facing east to south, on the bones is fragment of mud as pilaster. Left for photo.

(4) G 2436
Margin Note: G 2436 - walls.
In the mastaba in exposing the remains of the lining on west and the shafts. Limestone debris and red debris. Exposed all the lining of that mastaba. It is built of crude brick only on west is a stone course below the crude brick. It is north of G 2428 and west of G 2435. We exposed before three shafts and today we exposed two more, lettered A, B, C [= formerly G 2428 U], X, Y, but not started with them. Drawing of the mastaba will be on page 886.

(2) South of G 2440
South of this mastaba and west of G 2400. In removing the old dump. Searching for new mastabas and shafts in that place. Sand, limestone debris, rubble, dirty debris, and stones. Nothing exposed in that place.