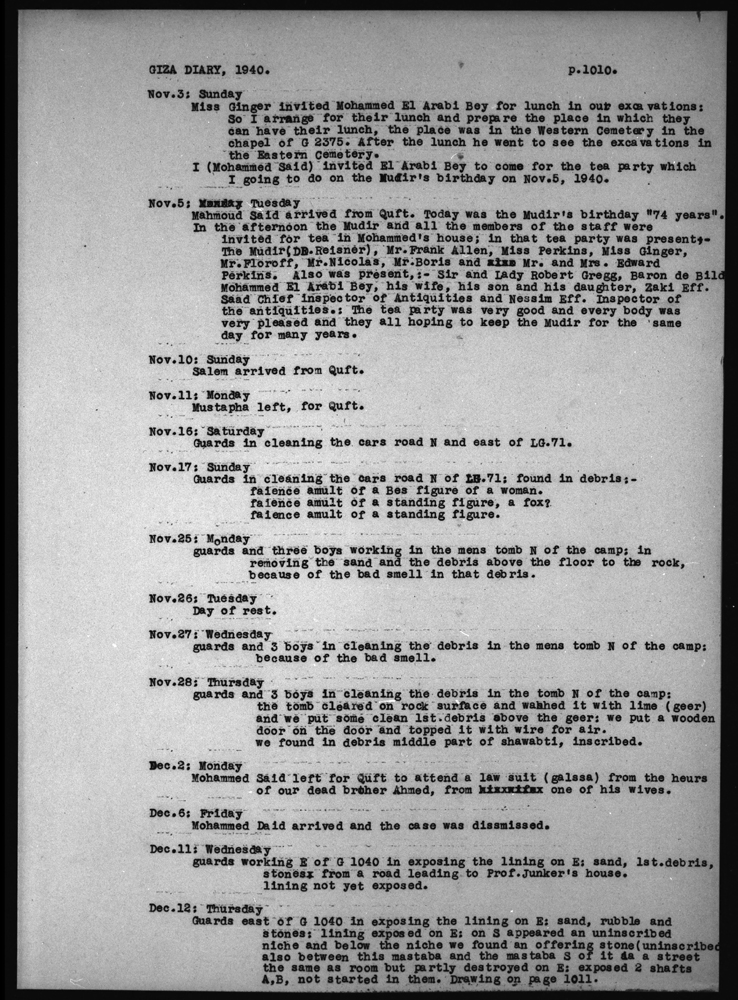 Sunday, November 3, 1940
Miss Ginger invited Mohammed El Arabi Bey for lunch in our excavations. So I arrange[d] for their lunch and prepare[d] the place in which they can have their lunch. The place was in the Western Cemetery in the chapel of G 2375. After the lunch he went to see the excavations in the Eastern Cemetery.
I (Mohammed Said) invited El Arabi Bey to come for the tea party which I [am] going to [have] on the Mudir's birthday on November 5, 1940.

Tuesday, November 5, 1940
Mahmoud Said arrived from Quft. Today was the Mudir's birthday "74 years." In the afternoon the Mudir and all the members of the staff were invited for tea in Mohammed's house. In that tea party was present: the Mudir (Dr. Reisner), Mr. Frank Allen, Miss Perkins, Miss Ginger, Mr. Floroff, Mr. Nicholas, Mr. Boris and Mr. And Mrs. Edward Perkins. Also was present: Sir and Lady Robert Gregg, Baron de Bilo, Mohammed el Arabi Bey, his wife, his son and his daughter, Zaki Eff. Saad Chief Inspector of Antiquities and Nessim Eff. Inspector of the antiquities. The tea party was very good and everybody was very pleased and they all hoping to keep the Mudir for the same day for many years.

Monday, November 25, 1940
Guards and three boys working in the men's tomb north of the camp, in removing the sand and the debris above the floor to the rock, because of the bad smell in that debris.

Wednesday, November 27, 1940
Guards and three boys in cleaning the debris in the men's tomb north of the camp, because of the bad smell.

Thursday, November 28, 1940
Guards and three boys in cleaning the debris in the tomb north of the camp. The tomb cleared on rock surface and washed it with lime (geer) and we put some clean limestone debris above the geer. We put a wooden door on the door and topped it with wire for air.
We found in the debris middle part of ushabti, inscribed.

Monday, December 2, 1940
Mohammed Said left for Quft to attend a lawsuit (galssa) from the heirs of our dead brother Ahmed [Ahmed Said Ahmed], from one of his wives.

Friday, December 6, 1940
Mohammed Said arrived and the case was dismissed.

Wednesday, December 11, 1940
Guards working east of G 1040 in exposing the lining on east: sand, limestone debris, stones from a road leading to Professor Junker's house. Lining not yet exposed.

Thursday, December 12, 1940
Guards east of G 1040 in exposing the lining on east: sand, rubble and stones. Lining exposed on east. On south appeared an uninscribed niche and below the niche we found an offering stone (uninscribed). Also between this mastaba and the mastaba south of it is a street the same as room but partly destroyed on east. Exposed two shafts A, B, not started in them. Drawing on page 1011.