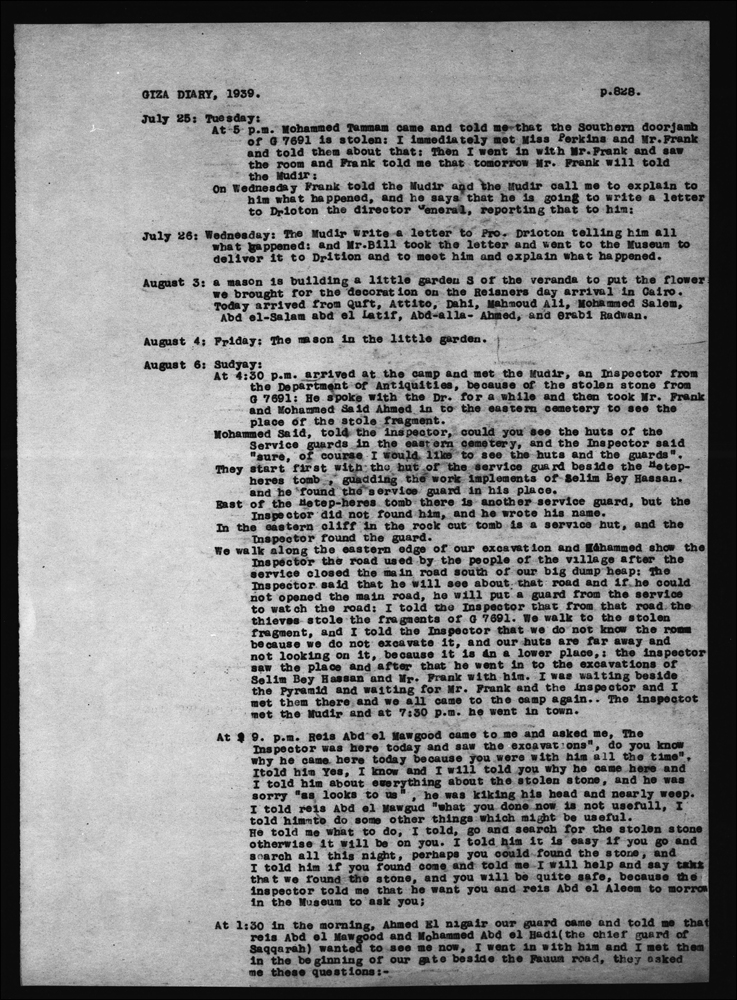 Tuesday, July 25, 1939
At 5 p.m. Mohammed Tammam came and told me that the Southern door jamb of G 7691 is stolen. I immediately met Miss Perkins and Mr. Frank and told them about that. Then I went in with Mr. Frank and saw the room and Frank told me that tomorrow Mr. Frank will tell the Mudir. On Wednesday Frank told the Mudir and the Mudir call me to explain to him what happened, and he says that he is going to write a letter to Drioton the Director General, reporting that to him.

Wednesday, July 26, 1939
The Mudir write a letter to Professor Drioton telling him all what happened and Mr. Bill took the letter and went to the Museum to deliver it to Drioton and to meet him and explain what happened.

Thursday, August 3, 1939
A mason is building a little garden south of the veranda to put the flowers we brought for the decoration on the Reisners day arrival in Cairo. Today arrived from Quft, Attito [Attito Mahmud], Dahi, Mahmoud Ali, Mohammed Salem, Abd el-Salam abd el Latif, Abd-alla-Ahmed, and Orabi Radwan.

Saturday, August 6, 1939
At 4.30 p.m. arrived at the camp and met the Mudir, an inspector from the Department of Antiquities, because of the stolen stone from G 7691. He spoke with the Dr. for a while and then took Mr. Frank and Mohammed Said Ahmed in to the eastern cemetery to see the place of the stole fragment.
Mohammed Said, told the inspector, could you see the huts of the Service guards in the eastern cemetery, and the Inspector said "sure, of course I would like to see the huts and the guards".
They start first with the hut of the service guard beside the Hetepheres tomb, guarding the work implements of Selim Bey Hassan and he found the service guard in his place.
East of the Hetepheres tomb there is another service guard, but the Inspector did not find him, and he wrote his name.
In the eastern cliff in the rock cut tomb is a service hut, and the Inspector found the guard.
We walked along the eastern edge of our excavation and Mohammed showed the Inspector the road used by the people of the village after the service closed the main road south of our big dump heap. The Inspector said that he will see about that road and if he could not opened the main road, he will put a guard from the service to watch the road. I told the Inspector that from that road the thieves stole the fragments of G 7691. We walk to the stolen fragment, and I told the Inspector that we do not know the room because we do not excavate it, and our huts are far away and not looking on it, because it is in a lower place. The inspector saw the place and after that he went in to the excavations of Selim Bey Hassan and Mr. Frank with him. I was waiting beside the Pyramid and waiting for Mr. Frank and the Inspector and I met them there and we all came to the camp again. The inspector met the Mudir and at 7.30 p.m. he went in town.
At 9 p.m. Reis Abd el Mawgood came to me and asked me. The Inspector was here today and saw the excavations. "Do you know why he came today because you were with him all the time?" I told him "yes, I know" and I will told you why he came here and I told him about everything about the stolen stone, and he was sorry "as looks to us", he was kicking his head and nearly weep. I told Reis Abd el Mawgood "what you do now is not useful, I told him to do some other things which might be useful. He told me what to do, I told, go and search for the stolen stone otherwise it will be on you. I told him it is easy if you go and search all this night, perhaps you could found the stone, and I told him if you found come and told me and I will help and say that we found the stone, and you will be quite safe, because the inspector told me that he want you and Reis Abd el Aleem tomorrow in the Museum to ask you.
At 1:30 in the morning, Ahmed El Nigair [Ahmed Hassan el-Nagar] our guard came and told me that Reis Abd el Mawgood and Mohammed Abd el Hadi (the chief guard of Saqqarah) wanted to see me now, I went in with him and I met them in the beginning of our gate beside the Fauum road, they asked me these questions: