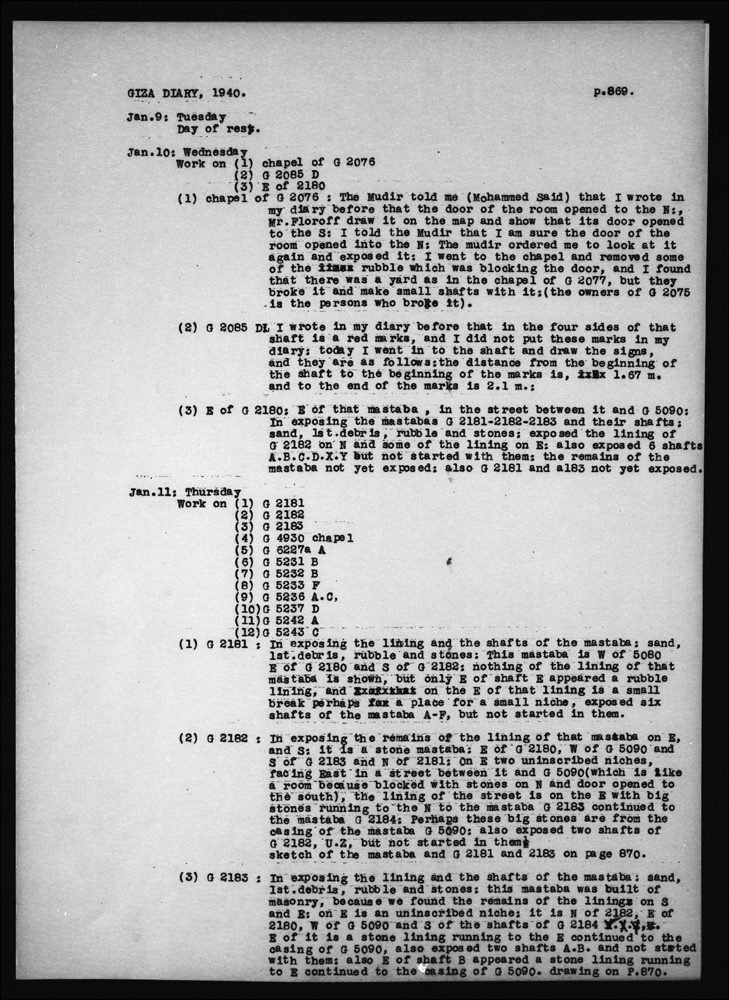 (1) G 2076 chapel
The Mudir told me (Mohammed Said) that I wrote in my diary before that the door of the room opened to the north. Mr. Floroff drew it on the map and show that its door opened to the south. I told the Mudir that I am sure the door of the room opened into the north. The Mudir ordered me to look at it again and exposed it. I went to the chapel and removed some of the rubble, which was blocking the door, and I found that there was a yard as in the chapel of G 2077, but they broke it and make small shafts with it. (The owners of G 2075 were the persons who broke it).

(2) G 2085
G 2085 D: I wrote in my diary before that in the four sides of that shaft is a red marks, and I did not put these marks in my diary. Today I went in to the shaft and draw the signs, and they are as follows. The distance from the beginning of the shaft to the beginning of the marks is 1.67 meters and to the end of the marks is 2.1 meters.

(3) G 2183
In exposing the lining and the shafts of the mastaba. Sand, limestone debris, rubble and stones. This mastaba was built of masonry, because we found the remains of the lining on south and east. On east is an uninscribed niche. It is north of G 2182, east of G 2180, west of G 5090 and south of the shafts of G 2184 V, X, Y. East of it is a stone lining running to the east continued to the casing of G 5090. Also exposed two shafts A, B and not started with them. Also east of shaft B appeared a stone lining running to east continued to the casing of G 5090. Drawing on page 870.